The world of the Black Panther is found across two main mediums, comics and feature films. For the most part the family connections mentioned in both the Marvel comics and the Marvel cinematic universe regarding the Black Panther character match up. There are however some subtle differences and connections that have not been mentioned in the movies as compared to comic book series.

In this post we will map out the family trees of the Black Panther universe and will take note of the variations between the comics and the movies.

What Is the Black Panther?

In July 1966 in edition .52 of the Fantastic Four comic books the world of Marvel fans was introduced to the first black superhero, The Black Panther. There is some dispute whether it was writer and editor Stan Lee or artist Jack Kirby who created the character.

Both Lee and Kirby claim to have created the character, each stating they saw the need for more diverse representation in the comic books. Whoever did actually create the character it certainly went on to be a success and have a very well fleshed out back story and history.

The Black Panther is a ceremonial name given to the chief of the Panther Tribe in the fictional African nation of Wakanda. A meteor crashed into the nation in the distant past leaving a deposit of the highly valuable metal Vibranium. This would help Wakanda become a greatly advanced and hugely powerful nation and the Black Panther is the head of this society.

It is a hereditary title that is passed down but also must be earned as well. The heir to the previous Black Panther must undergo a series of trials to prove their worth and earn the ancestral powers of the Black Panther.

In both the comic books and the cinematic universe the current Black Panther is King T’Challa.

In the Marvel cinematic universe we are introduced to Prince T’Challa in Captain America: Civil War. T’Challa and his father King T’Chaka attended the Bilderberg Conference at which the King would be assassinated by Ullysses Klaue.

Upon his father's death T’Challa became next in line to the Black Panther title and would set out to avenge his father initially believing the assassin to be the Winter Soldier also known as Bucky Barnes.

T’Challa’s mother was N'Yami, the first wife of T’Chaka who would die giving birth to him. According to the comics, believing that they could not have children, T'Chaka and N’Yami adopted a foreign child by the name of Hunter.

In the comics it is also established that King T’Chaka has a child with an unknown woman named Jakara who becomes a general of the Wakandan army before finally remarrying to a woman named Ramonda. From this second marriage he has the very intelligent Shuri, the half sister to T’Challa.

The Family of Storm

As T’Challa’s main love interest in the comic books and the mother of his only child, albeit in a different universe, it is important to mention Storm. Her mother N’Dare was the princess of an unnamed Kenyan tribe and herself the daughter of the Queen of Kenya. N’Dare came from a tribe of witches and priestesses passing on this knowledge to her daughter.

Storm's father David Munroe was African American and met her mother in America but they would later move with their daughter to Egypt. 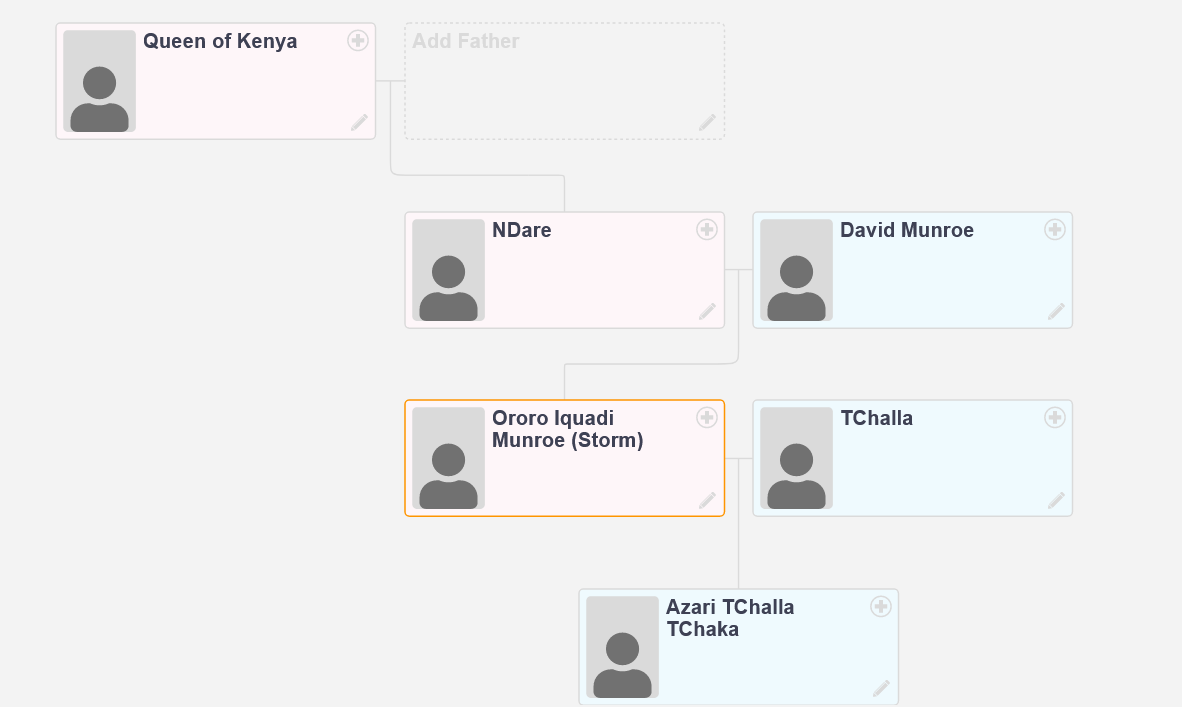 This character of the Marvel universe differs between the comic books and movies. In the comics he is a native born Wakandan whose parents are killed by a traitor trying to sell the secrets of Wakanda. N’Jadaka was then taken from Wakanda as a child and raised by cruel caretakers.

He would eventually return to Wakanda as an adult to challenge T’Challa for the title of Black Panther. This bid would fail.

In the cinematic universe however the story changes a little by making N’Jadaka a family member and giving him at least a genetic right to challenge for the rule of the nation. The movies suggest that T’Challas uncle N’Jobu the younger brother of T’Chaka is the father of N’Jadaka.

As the second son N’Jobu becomes a member of the War Dogs, the central intelligence bureau of Wakanda. N’Jobu goes as a spy to America but soon starts to plot against his brother the King and prompting T’Chaka to face his traitorous brother. N’Jobu went on the attack and T’Chaka killed him.

This would leave N’Jadaka an orphan. He would grow up and join the U.S navy Seals taking on the name Eric Stevens and later the nickname Eric Killmonger. He would return to Wakanda to challenge his cousin T’Challa for the throne of the nation.

The grandfather of the current Black Panther T’Challa, Azzuri was the father of T’Chaka, N’Jobu (cinematic universe) and S’Yan (comic books). Azzuri’s wife the mother of his children was Nanali who would be killed by a Nazi named Colonel Fritz Klaue an ancestor of the man who would assassinate Azzuri’s son T’chaka.

In the movies Azzuri’s second son is named N’Jobu and does not believe in the isolation policy of the nation of Wakanda which leads to the conflict that causes his older brother the King T’Chaka killing him.

After the death of his wife Nanali at the hands of the outsider, Azzuri instigated the policy of isolation from the outside world. This helped Wakanda control the Vibranium and prosper technologically from doing so.

Bashenga was a wise warrior of the Panther Tribe who in the aftermath of the Vibranium meteorite gathered together all the tribes of Wakanda. This would lead to the first unification of Wakanda as a single nation.

With a spiritual connection to the panther goddess Bast, Bashenga founded the Cult of the Panther and became the very first Black Panther. It is this title and from his lineage that the Black Panther has passed down countless generations to T’Challa.

Shuri is the half sister of T’Challa and in the comics was herself the Black Panther for a brief time. She at one point intended to challenge her uncle S’Yan for the Black Panther title but was beaten to it by her half brother T’Challa.

After an incident that left T’Challa in a coma Shuri finally got the chance to become the Black Panther. She successfully completed the trials having been trained by her older brother previously. In the movies her scientific abilities are invaluable in the protection of Wakanda from invading forces.

The fans of the Marvel movies will likely be aware that for a time Bucky Barnes, the former army buddy of Captain America and who is also the Winter Soldier, spent some time living in Wakanda. It is quipped that they have dubbed him the White Wolf.

In the comic books however the White Wolf of Wakanda is actually T’Challa’s adopted older brother Hunter. Adopted by T’Chaka and N’Yami, Hunter’s parents died when their plane crashed in Wakanda. The couple raised him as their own.

Hunter knew once T’Challa was born that he himself would never become the Black Panther and this made him jealous of his younger sibling. He deeply loved Wakanda and did his best to be as good a Wakandan as he could.

His deep patriotism led to his appointment by his father to the Hatut Zeraze, the nation's secret police. It was in this role he earned the nickname the White Wolf. The agency became brutal and was finally disbanded by T’Challa.

Hunter along with his loyal Hatut Zeraze subordinates left Wakanda becoming a group of mercenaries for hire. Despite his anger at having his role taken from him Hunter’s love for Wakanda kept him from ever seeking revenge against his adoptive brother.