Do you love Harry Potter and genealogy? If so, this article is for you. We'll cover all the important Harry Potter characters and map out their family trees for your viewing pleasure!

The story of Harry Potter is an amazing one, after all, everyone likes a story of good versus evil, especially when it involves magic powers! But have you really sat down to think about the Family trees of the main characters of the book? While the Harry Potter family tree is clearer than others in fictional worlds (Like Star Wars), it can still provide a lot of important information when it comes to understanding the plot of the movies.

Without further ado, let’s look at the most famous family tree in the books/movies, that of Harry Potter.

See any surprises? You already knew that Harry’s mother, Lily Evans, was sisters with Harry’s Aunt Petunia, and was a muggle-born witch. Maybe you are surprised not to see Sirius Black on this family tree. Remember, Sirius Black is Harry’s Godfather and not of any actual blood relation. It is a bummer that the family tree has to have genes like that of Vernon Dursley in it, especially when you consider what a disgrace Dudley is.

In the books, not much history is given about Harry’s family beyond his parents and grandparents, but many speculated that he was related to Charlus Potter (a man who appears on the Black Family Tree). But if this were the case, he would be distantly related to many of the characters in the book, most notably his future wife Ginny.

In order to dispel these rumors, J.K Rowling posted on the Pottermore webpage that this myth was not true, and instead wrote about the real genealogy of Harry. This genealogy goes all the way back to the 12th century however and is too extensive to put here.

Although he dies early in the series (and joins late for that matter), Sirius Black plays an important role in Harry’s life, and therefore you should take a glance at the Family tree. Sirius black always denounced his dark roots, which caused his mother to black him out of the Family tree. Other “traitors” were also blacked out and never specified in the books by J.K Rowling.

As you can see, Sirius Black is actually cousins with Bellatrix Lestrange, who is actually Malfoy’s aunt. This explains a lot about the 6th book when Bellatrix becomes invested in the health and wellbeing of Malfoy while completing his quest.

Now that you’ve seen a dark family tree, it’s time to look at one that ended up a little happier, that of everyone’s favorite redheaded family, the Weasley’s.

Did you know the Weasley’s were actually distantly related to the Black Family? Well, now you do as Arthur Weasley is a descendant of Cedrella Black who is one of the granddaughters of Phineas N. Black, making Arthur Weasley and Sirius Black second cousins once removed. Cedrella, like her distant cousin Sirius Black, was also removed from the family tree for dating (and marrying) a man who was sympathetic to muggles, Septimus Weasley.

While the history of the Weasleys is well known, little is known about Ron Weasley’s eventual wife Hermione Granger. Hermione is muggle-born, meaning her family has no roots in the Wizarding World, and for this reason, apparently, J.K. Rowling felt her personal history was better left out.

Therefore her family tree is really just her parents, Mr. and Mrs. Granger, but many fans speculate how it was possible then that she got her magical powers. For this reason, it is speculated that a wizard by the name of Hector Dagworth-Granger could be a distant relative of Hermione and explain where her magical powers came from.

Did you spot the surname Longbottom on the Black family tree? Yes, Neville Longbottom is also a descendant of the Black family, however, for reasons that are unknown, his ancient relative Callidora Black is not removed from the family tree, although his parents had long been considered traitors. Many believe this is because Frank and Alice Longbottom were Aurors.

Neville Longbottom would go on to marry Hannah Abbott, who, like Hermione, doesn’t have a large family tree to refer back to as only her parents are mentioned in the novels and movies.

Time for the most nefarious of the Harry Potter Family trees, and that is the one that features none other than Tom Riddle aka Voldemort. You’ll notice that this family tree is much longer than it is wide, which is perhaps a good thing when you think about how evil Tom Riddle turned out to be. 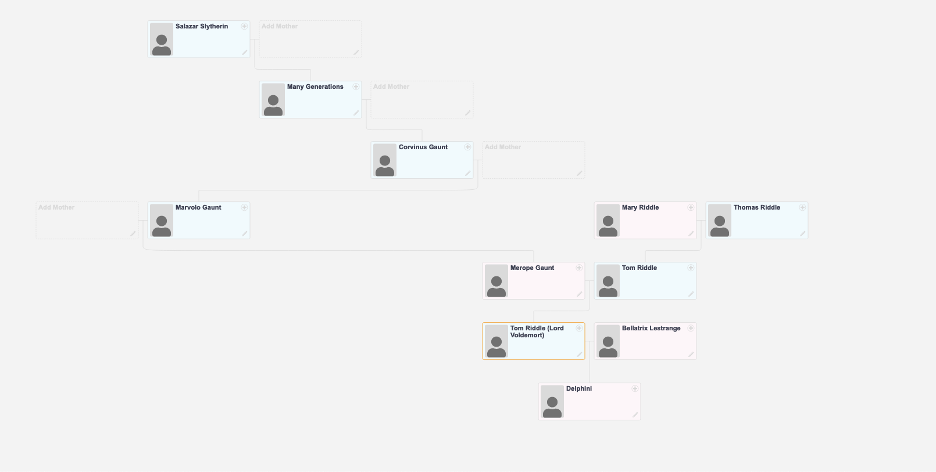 As you can see, the rumors are true, Voldemort is a descendant of Slytherin via his mother’s side, Merope Gaunt, who married Voldemort’s father, Tom Riddle. This would explain his powers, as well as his anger at his family, as his own father was muggle-born. To hide this fact, the young Tom Riddle altered his name to be Lord Voldemort, an anagram of his name, as he didn’t want to be known by the last name Riddle anymore.

If you’ve read or seen Harry Potter and the Cursed Child, then you know the Slytherin line, unfortunately, didn’t end with Voldemort as he had a child (somehow) with Bellatrix Lestrange in the year before he died. Whether J.K Rowling did this so she could return to the wizarding world with a new villain, or because she felt a little pity for Voldemort at the end is unclear. Either way, Delphini is still around (albeit in Azkaban) to carry on the Slytherin line.