How Many Ancestors Do You Have?

There are several theories regarding just how many generations there have been between the first appearance of our species Homo Sapiens Sapiens. As a species, science believes we developed over 300,000 years ago. A rough estimate of a generation is between 20-30 years. This means that roughly speaking there has likely been between 10,000 and 15,000 generations of our species.

Why is it important how many generations there have been? Well, simply put if we are talking about how many ancestors we have had we can’t forget those prehistoric humans even if we will never know who they were.

So let's start out with a little chart to help us to begin to understand the scope of how many ancestors we may have in theory:

What needs to be understood is that although in theory we should likely have an immeasurable number of ancestors, in practice this is definitely not the case. The reason for this is a genealogical term known as Pedigree Collapse. 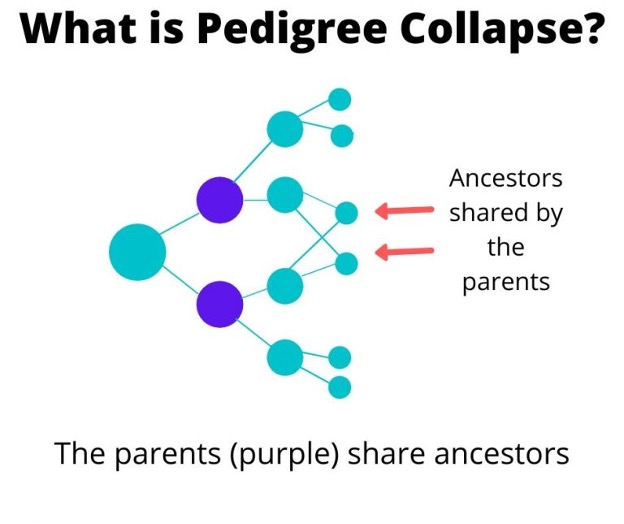 What Is Pedigree Collapse?

So anyone who has been researching their family tree will likely know what a pedigree chart is. It is basically a graphic that links you to your parents, them to their parents and so on. Basically, it is a visual representation of your direct line family members,

Pedigree collapse is when this neat little visual chart is essentially ruined by having to list some of the same people more than once in your direct lines. This occurs when cousins intermarry creating situations whereby someone may have the same set of ancestors on multiple different family lines.

An Example of Pedigree Collapse

In 1911 Thomas and Bertha married and they very likely knew that Bertha’s mother Mary was Thomas’ first cousin. This meant that they were first cousins once removed. They shared a set of common ancestors.

Instead of having 30 cumulative ancestors at the great-great-grandparents level my grandfather only had 28. This has a cumulative effect because all of William Davies' and Elizabeth Humphreys' ancestors are now both shown twice in each generation going back.

How Many Ancestors Do We Really Have?

So if we assume that 20 generations should produce 1,048,576 ancestors can we reasonably believe that we have that many different ancestors? The answer is a resounding no because when we consider that 20th generation was 400 to 600 years ago general population numbers would tend to prohibit that likelihood.

If we were to go back a further six generations from those twenty we would find our potential ancestors jump up to 67,108,864 individuals. It is simply an impossible assumption to believe that at no point during those generations did cousins, even distant ones, intermarry.

It doesn’t matter how distant the cousin relationship is if they share a set of common ancestors then it will trigger pedigree collapse. If we consider that after 27 generations a person should have 134,217,728 ancestors, that would be almost double the number of people estimated to have been living in Europe around the respective time frame.

At 40 generations the exponential growth suggests we should have over 500 billion ancestors. This is where the point is truly made because it is estimated that there has only been in the region of 108 billion humans in total throughout the history of our species.

So how many ancestors do we really have? The answer to this question is really impossible to answer or even reasonably estimate. There are so many factors including how many incidents of pedigree collapse occur in your tree.

The biggest problem we face is that it is impossible for us to create a full family tree that reaches back to our original ancestors.

When Does Pedigree Collapse Generally Start?

It is likely for most people that they would have pedigree collapse at some point within the first 10 generations of their ancestors. Within the 1024, 7x great grandparents we should have there should be at least some level of overlap.

In some family instances, pedigree collapse can occur very early for instance if first cousins marry and have children, The children of these marriages would have one set of great grandparents who appears on both their maternal and paternal side. So instead of eight great grandparents, these children would only have six.

There are also the rare occasions when siblings have children together meaning that the offspring of these unions only have one set of grandparents. This subsequently halves every expected generation of potential ancestors.

It is impossible to truly put a number on how many ancestors an individual has. There is no physical way of tracing this because we have ancestors dating all the way back to the origins of our species. As homo sapiens spread out around the globe the population grew exponentially. When we estimate our potential ancestors these two grow exponentially.

These two growth rates meet, one moving forward in time the other reaching into the past. Very quickly we reach a point where the number of ancestors we should have theoretically is vastly more than the actual global population at the time.

Pedigree collapse is a very real thing and it has happened in our own trees more times than we could possibly imagine. So there really is no way to assess how many ancestors we have but rest assured there were a lot of people who had to come together through hundreds of thousands of years to make us.