At the time of writing this article in June of 2022 the jubilee celebrations for Queen Elizabeth II of England have recently come to a close marking 70 years on the British throne for this incredible monarch.

She is the second longest ruling monarch in the world behind Louis XIV who sat upon the French throne for 72 years, 110 days. Louis did have the advantage however of being elevated to the throne at the tender age of 5 years old.

Who Was Queen Victoria?

In 1817 the reigning monarch of England George III who had many children only had one grandchild who could legitimately inherit the throne. This was Princess Charlotte of Wales, the daughter of his son George. Charlotte however died in 1817 creating a panic to ensure the future of the House of Hanover.

This pressure was brought to bear on Victoria’s father and his other unmarried siblings to wed and produce the next generation of heirs. Upon her birth in 1819 Victoria was fifth in line to the British throne behind the four eldest sons of George III.

In 1820 George III died passing the crown to George IV who ruled for just over a decade before his own death. In 1830 George IV's brother William became William IV of England and he ruled until 1837. By this time the two other eldest sons of George III which included Victoria’s own father had already died. This meant that Victoria was now the heiress to the throne.

Victoria’s reign started on June 20th 1837 and her official coronation was just over a year later on June 28th 1838.

Prince Edward Duke of Kent and Strathern was born November 2nd 1767 to George III of England and Charlotte of Meclenburg-Strelitz. Edward was one of 15 children whose ranks included two kings of the United Kingdom and one king of Hanover.

Edward's father George III was the son of Frederick Prince of Wales and his wife Princess Augusta of Saxe-Gotha. Charlotte of Mecklenburg-Strelitz, Edward's mother, was the daughter of Duke Charles Louis Frederick of Mecklenburg, Prince of Mirow and Princess Elisabeth Albertine of Saxe-Hildburghausen.

Although fourth in line of succession to the throne of the United Kingdom Edward would die in 1820 less than a week before his own father George III passed away. Edward's only legitimate daughter princess Alexandrina Victoria of Kent became fourth in line for the throne upon her father's death.

It is rumored that Edward may have had several illegitimate children through a number of mistresses and even awarded some of these children with government posts. These children however are not included in his official family tree as they are not confirmed as being his. 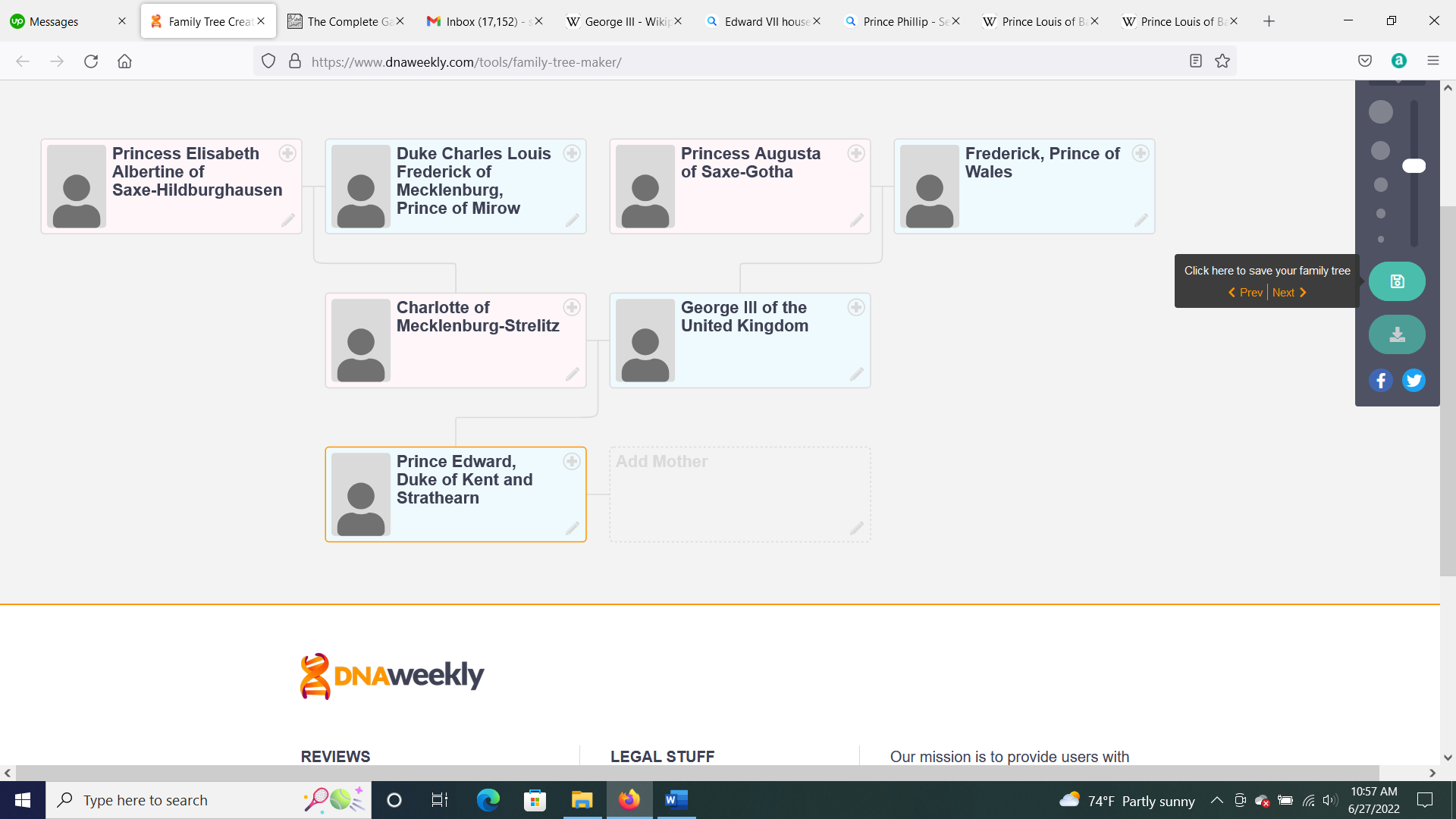 Duke Francis was the eldest son of Ernest Frederick, Duke of Saxe-Coburg-Saalfeld and Sophia Antonia of Brunswick-Wolfenbüttel. He would succeed to his fathers Dukedom in 1800.

Countess Augusta of Reuss-Ebersdorf was the second wife of Duke Francis and was the second child of Heinrich XXIV, Count Reuss of Ebersdorf and his wife Countess Karoline Ernestine of Erbach-Schönberg. 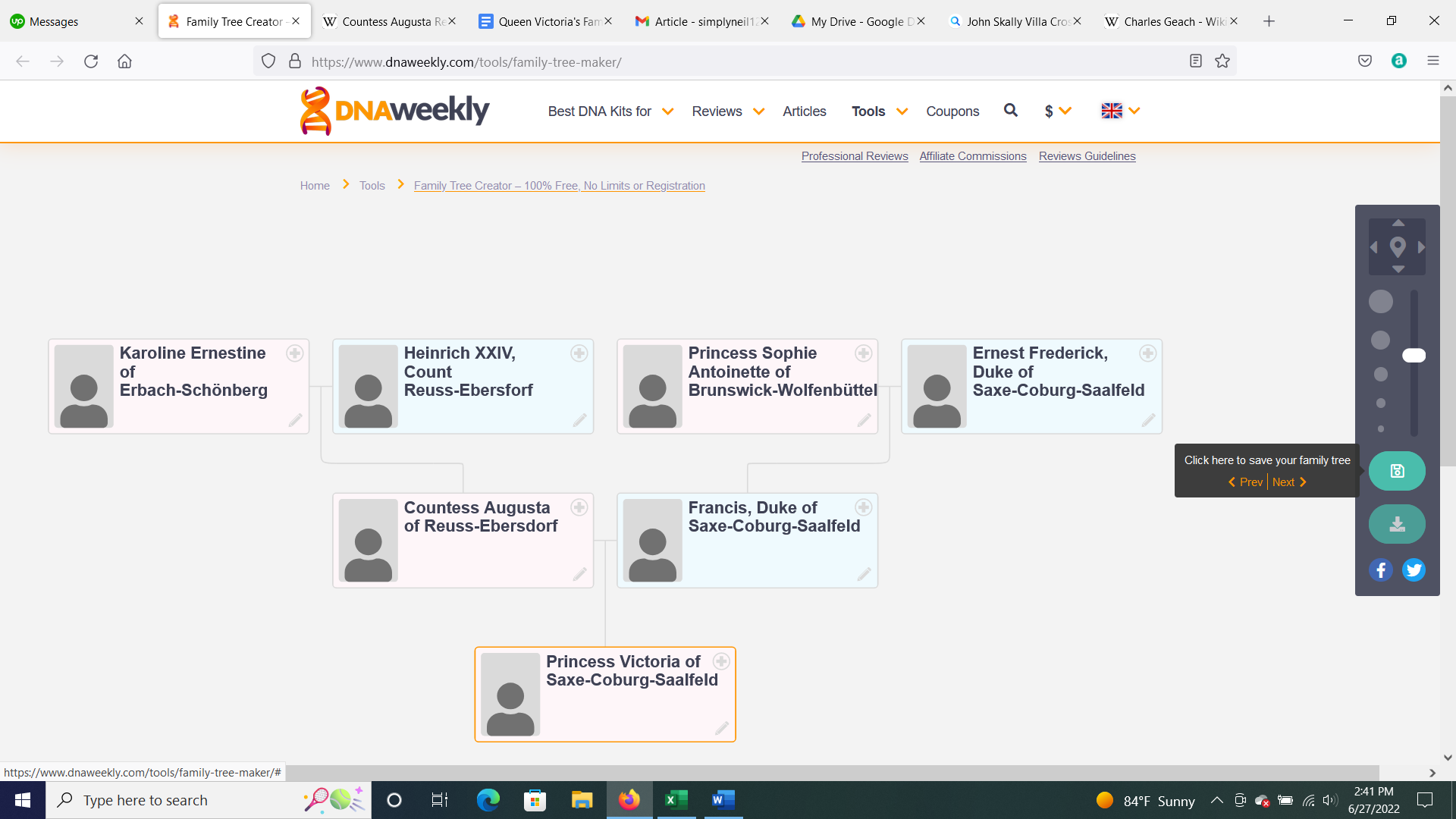 The Husband of Queen Victoria and His Family

As an unmarried Queen, Victoria was bound by social convention to live with her mother which actually meant that her mother had rooms at Kensington Palace. This was not something that the young queen relished.

The alternative however, as was pointed out by Lord Melbourne to the young Queen, was marriage. This was not something Victoria was eager to rush into but it was certainly something that was expected of her.

Prince Albert of Saxe-Coburg and Gotha was already being groomed for this role and Victoria, although reluctant to marry so soon, was not completely averse to this match. They would eventually marry on February 10th 1840. Victoria’s mother was moved to Ingestre House soon after this marriage.

Born near Coburg, Germany on August 26th 1819 Prince Albert was the second son of Ernest I, Duke of Saxe-Coburg-Saalfeld, and his first wife, Princess Louise of Saxe-Gotha-Altenburg.

Prince Albert's mother Princess Louise was the only daughter of Augustus, Duke of Saxe-Gotha-Altenburg and his first wife Louise Charlotte of Mecklenburg-Schwerin. She married Albert's father when she was just 16 years old.

Albert had just one sibling, his older brother and heir to his fathers title Ernst II, Duke of Saxe-Coburg-Saalfeld. 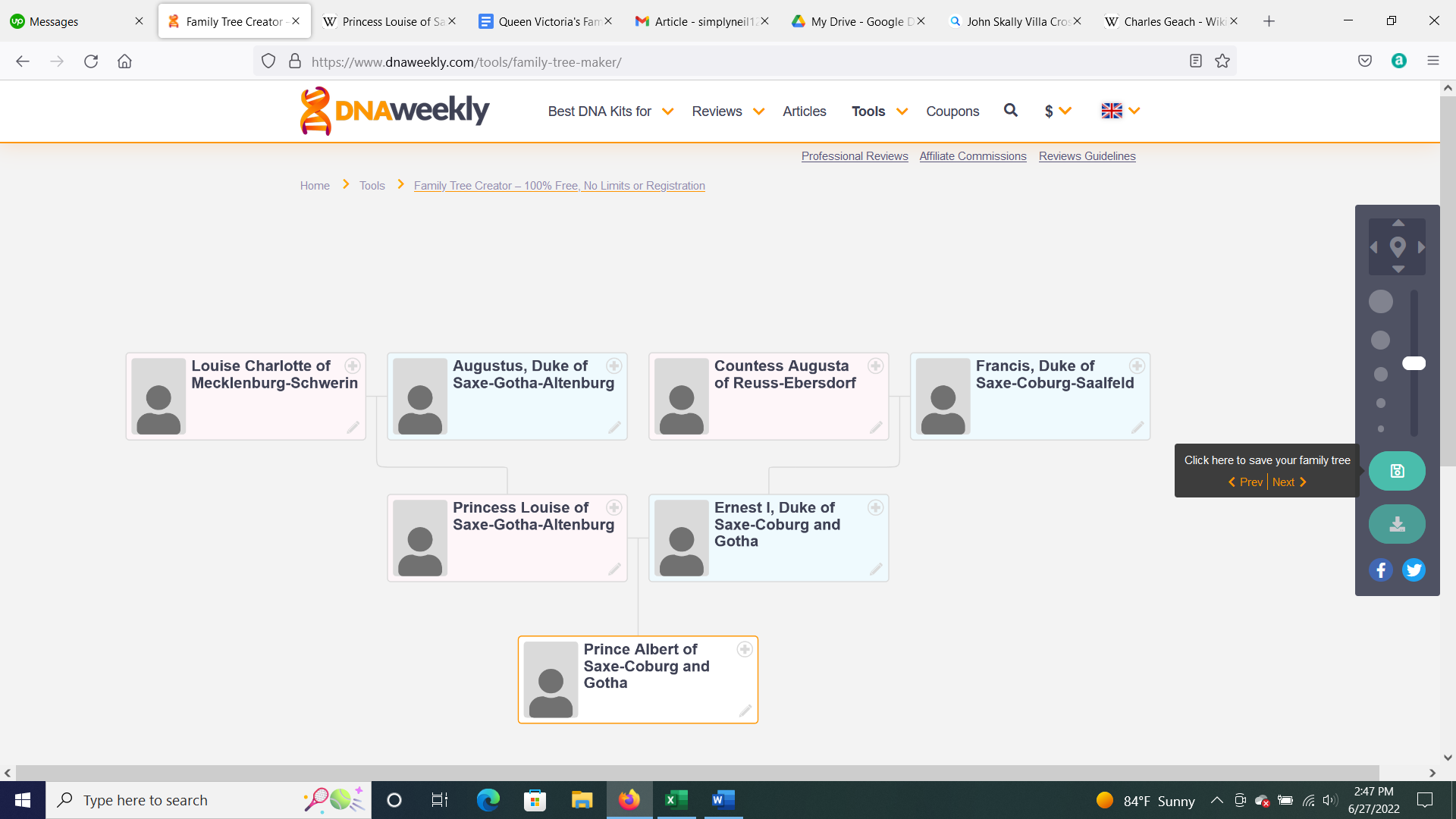 Queen Victoria had a distaste for being pregnant and is reported to view breastfeeding with disgust and to feel that babies were ugly. However, this certainly did not stop the queen from doing her duty when it came to producing heirs.

Over the space of 17 years Victoria and Albert produced nine children, many of whom went on to form the basis for much of today's European monarchy. Early on Victoria’s own childhood governess, Baroness Louise Lehzen ran much of the royal household which included caring for the children.

Prince Albert did not like how Lehzen ran things and thought her a poor influence on his daughter Victoria. An ensuing disagreement between the Queen and her husband led to Lehzen’s eventual dismissal in 1842.

The first child of Victoria and Albert and namesake of her mother, Princess Victoria was born November 21st 1840. In 1858 she would marry the German Emperor Frederick III with whom she would have 8 children.

At the time of the marriage Fredrick was still just a prince and would not become Emperor until 1888 and would only rule for 99 days before his eventual death. Her eldest son Wilhelm of course took over from his father. 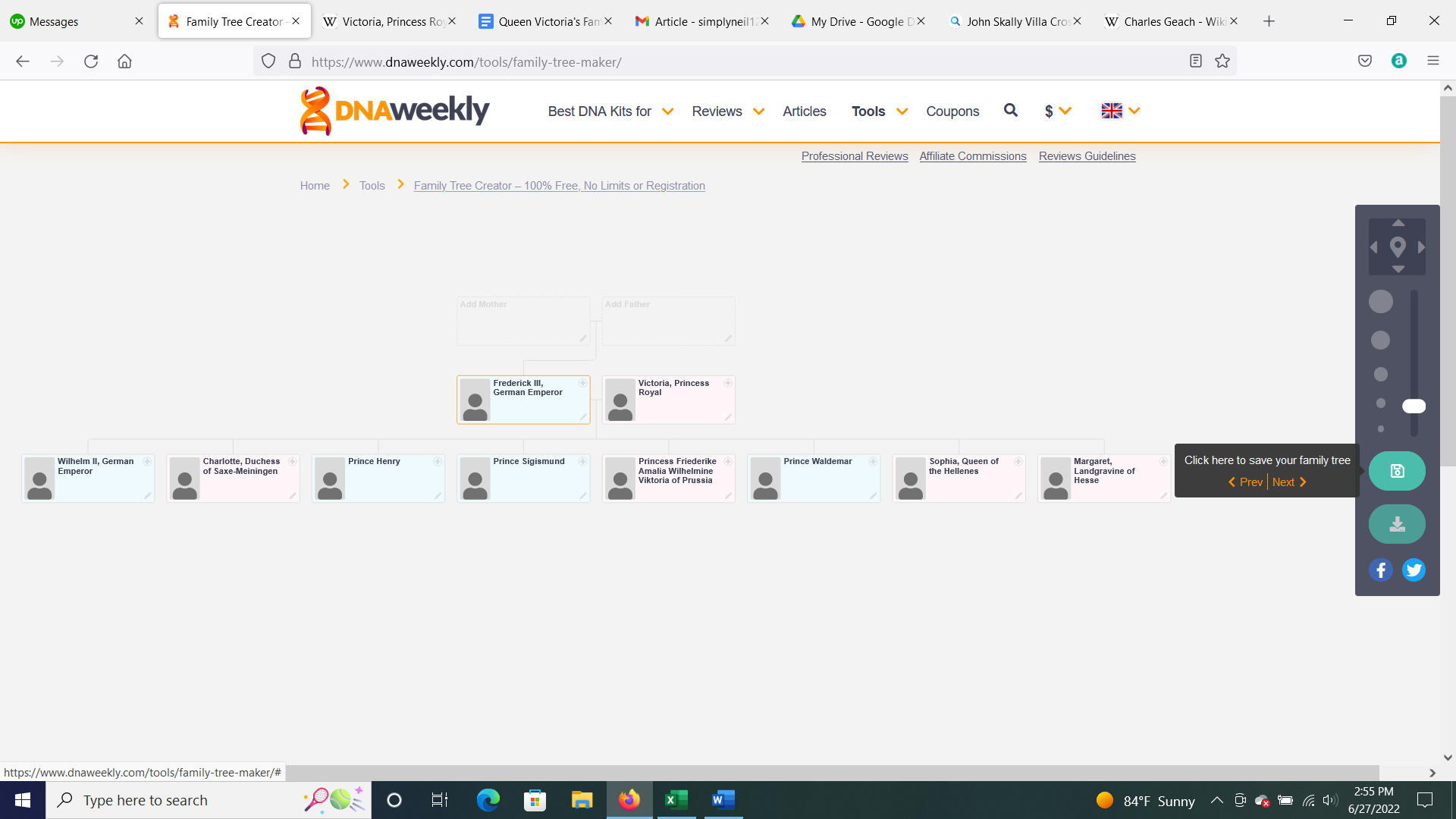 The second child and eldest son of Victoria and Albert, Edward was born November 9th 1841. In 1863 Edward would marry Alexandra of Denmark with whom he had six children.

Upon his mother's passing in January of 1901 Edward would become King of the United Kingdom and the first monarch of the House of Saxe-Coburg and Gothe. Despite his mother the queen being of the house of Hanover tradition followed that he would take the name of his father's house. 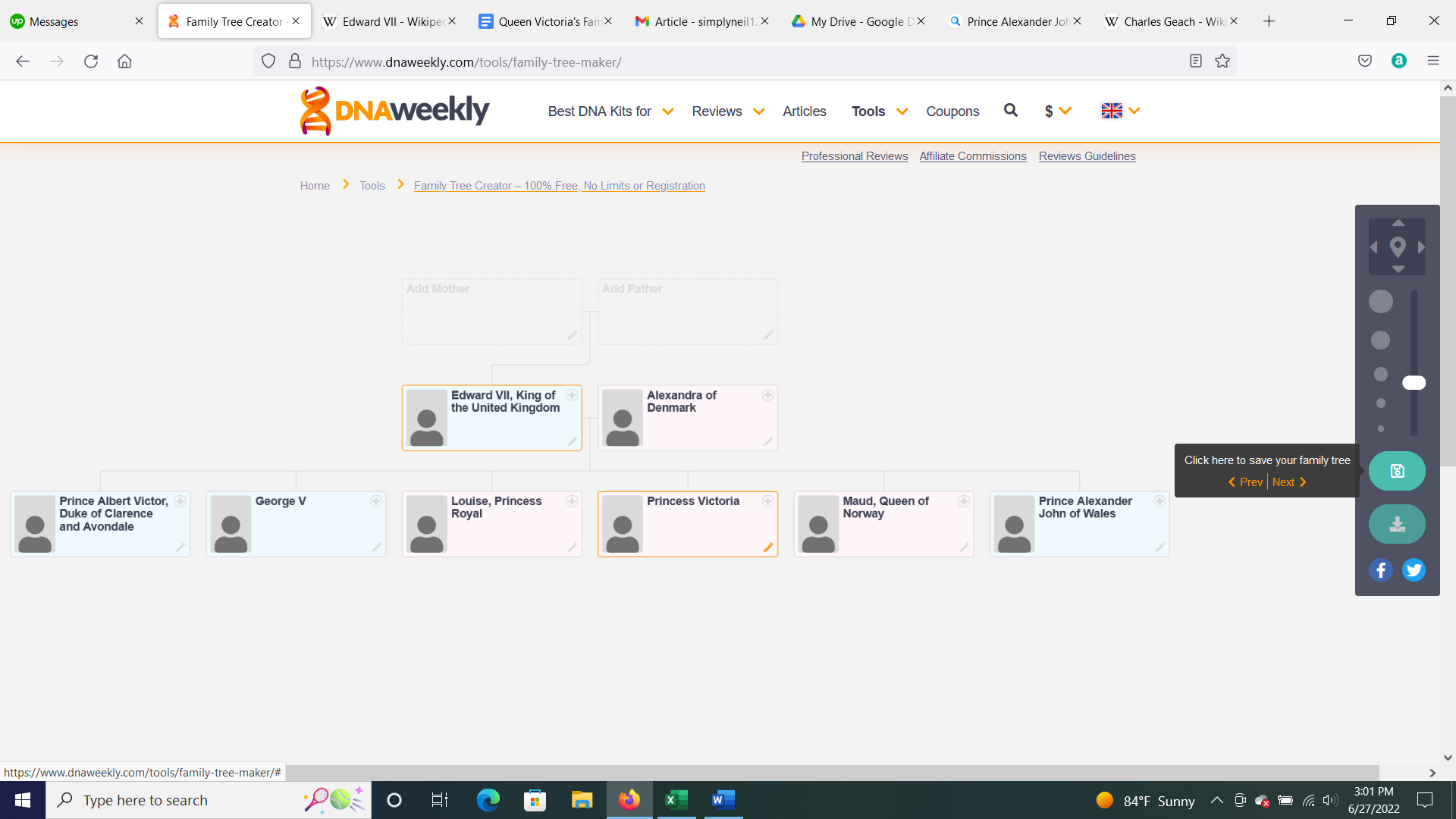 The third child and second daughter of Victoria and Albert Princess Alice was born April 25th 1843 at Buckingham Palace. In 1862 she would marry Louis IV, Grand Duke of Hesse and by Rhine. Louis was just one of a list of potential suitors written up by Alice's older sister Victoria by their mother's request.

Queen Victoria was anxious that her children marry for love but was also mindful that they should not be seen to marry beneath their station. It was therefore important to offer options only from the elite classes.

Alice and Louis were to have seven children together, one of which, Alexandra Feodorovna, would become Empress of Russia by marriage. Tragically the Russian revolution would see Alexandra, her husband Nicholas II and their children all executed in 1918. 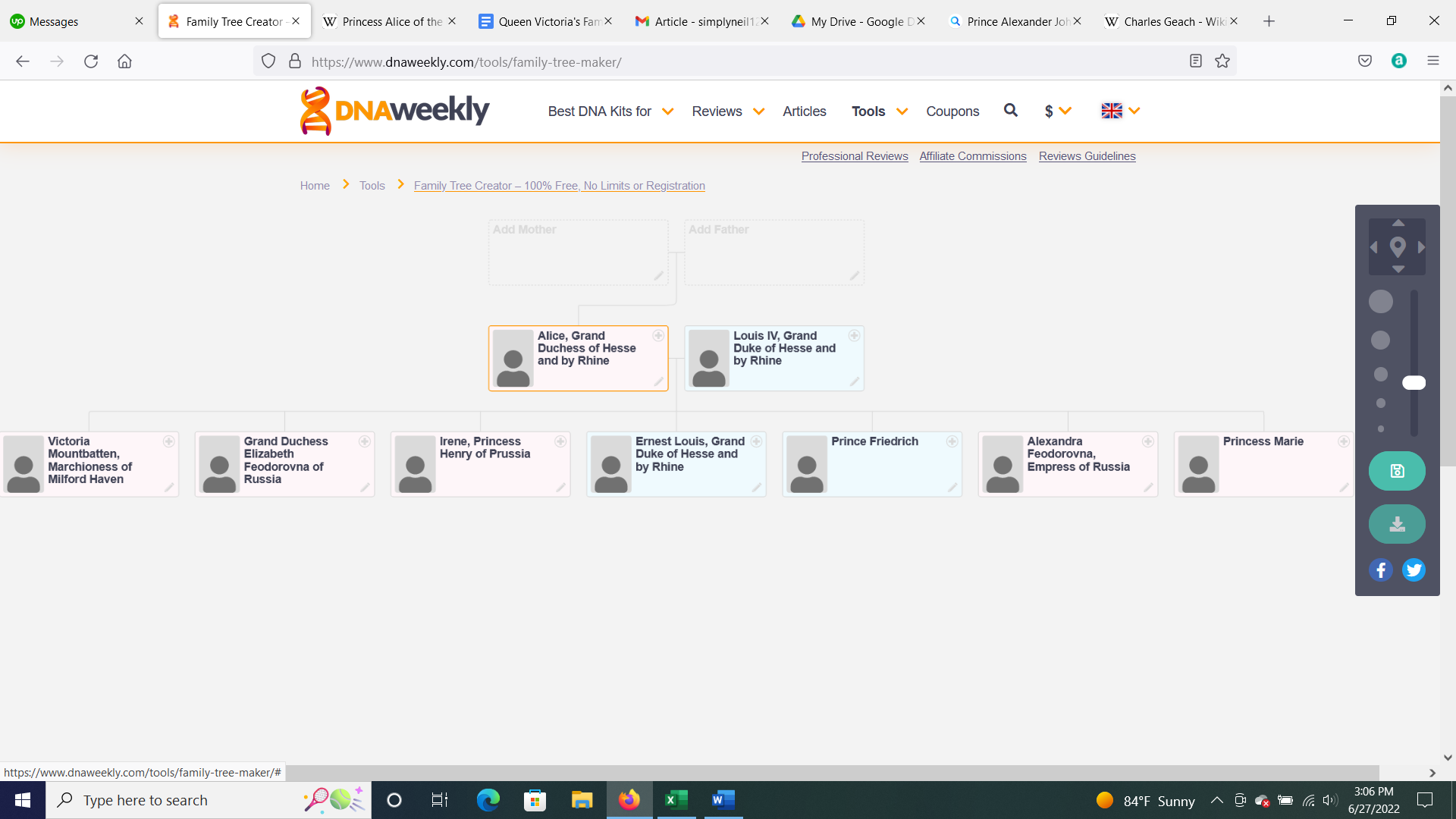 The fourth child and second son of Albert and Victoria, Alfred was born August 6 1844 at Windsor Castle. In 1874 Alfred would marry Grand Duchess Maria Alexandrovna of Russia, the first cousin of Nicholas II the Emperor of Russia and Alfred’s own brother-in-law.

Together they would have five children, one of whom Marie, would become the last Queen of Romania when she married Ferdinand I of Romania in 1893. Their grandchildren also included a Queen of Greece and a Queen of Yugoslavia.

In 1893 Alfred’s uncle Ernst II Duke of Saxe-Coburg and Gotha passed away leaving this title to pass onto Alfred. His older brother Edward was already heir apparent to the throne of the United Kingdom. 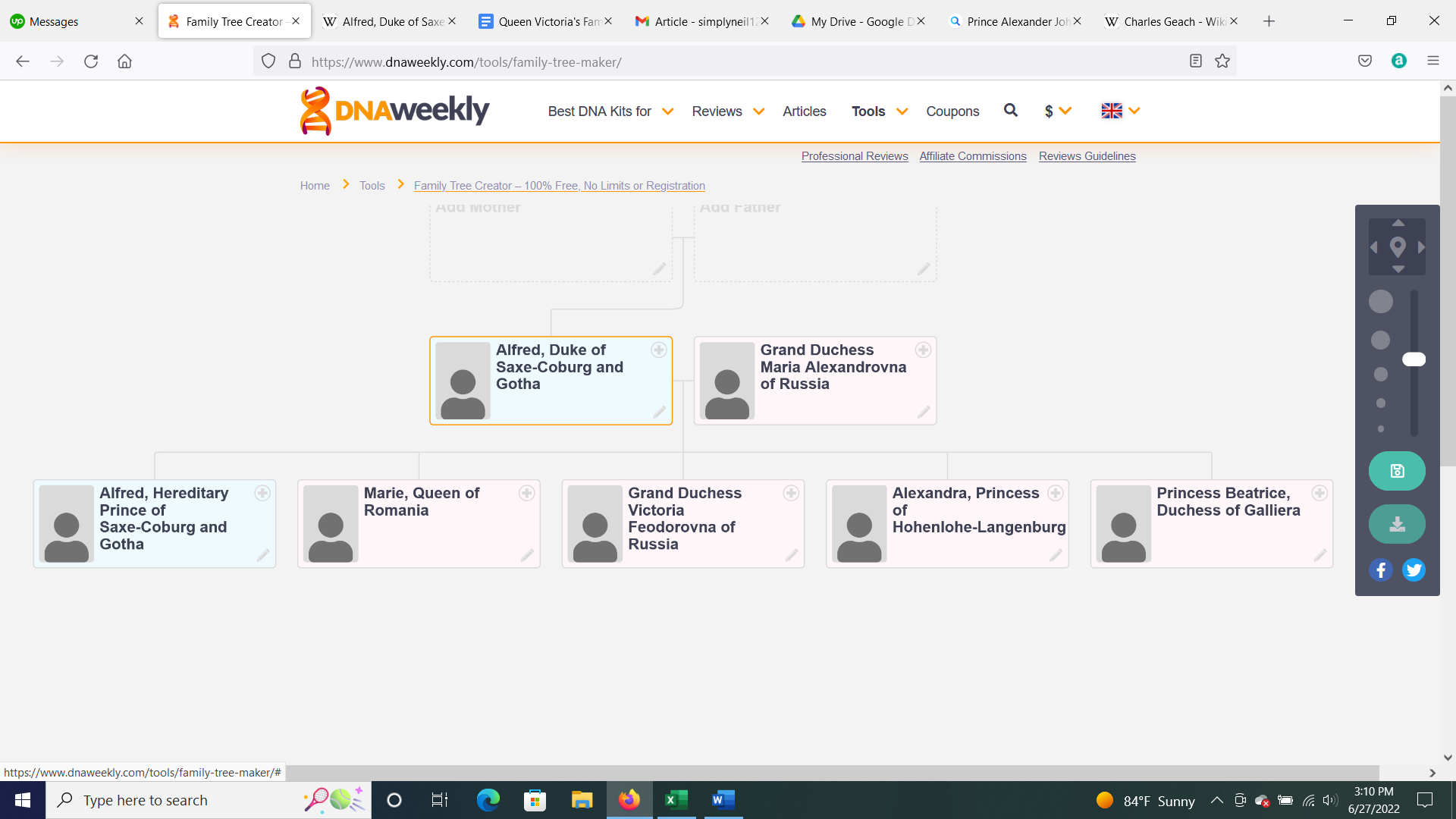 The fifth child and third daughter of Victoria and Albert Princess Helena was born May 25th 1846. In 1866 she married Prince Christian of Schleswig-Holstein the second son of a Duke. Together they had four children. 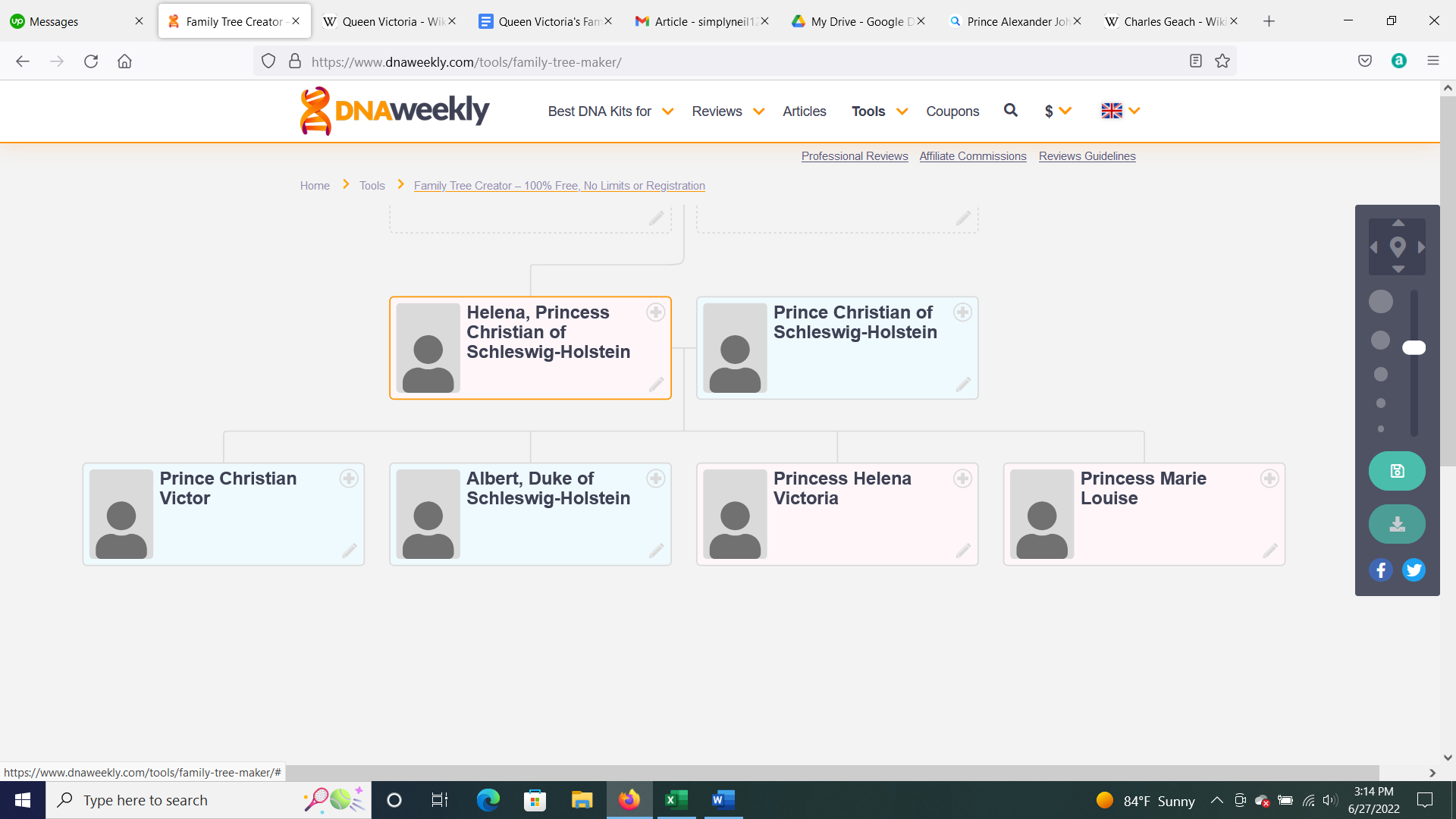 The sixth child and fourth daughter of Victoria and Albert, Princess Louise was born March 18th 1848 at Buckingham Palace. A trusted secretary of sorts to her mother, Queen Victoria did not want her to marry a foreign prince like her older sisters.

Victoria instead steered Louise toward a husband from the British aristocracy. She would fall in love with John Campbell, Duke of Argyll and Marquess of Lorne who she would eventually marry in 1871. Campbell would later become Governor General of Canada.

The couple remained childless which was a source of friction for part of their marriage. This was however reconciled in the latter years of their union.

The seventh child and third son of Victoria and Albert, Prince Arthur was born May 1 1850 at Buckingham Palace. In 1879 prince Arthur married Princess Louise Margaret of Prussia, a great granddaughter of King Frederick William III of Prussia.

Together they had three children the eldest of which Margaret would go on to marry Gustaf Adolf, Crown Prince of Sweden who would become King of Sweden in 1950. 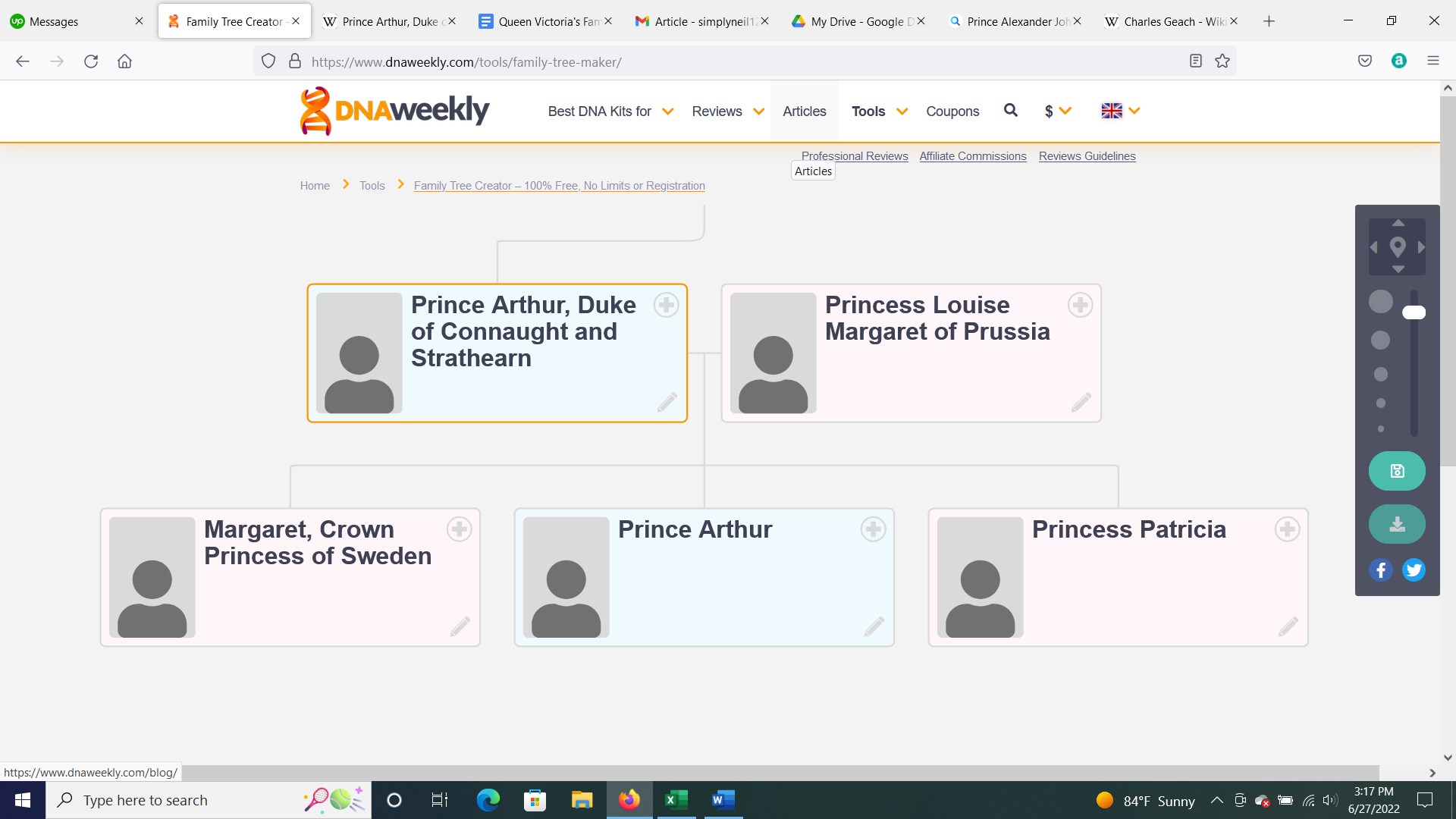 The eighth child and youngest son of Victoria and Albert, Prince Leopold was born April 7th 1853 at Buckingham Palace. In 1882 Leopold married Princess Helen of Waldeck and Pyrmont with whom he had two children.

Leopold would sadly die just two years later when a combination of hereditary hemophilia and a fall that caused a bump on the head led to a brain hemorrhage. The blood clotting disease hemophilia greatly affected many of Queen Victoria’s descendants. 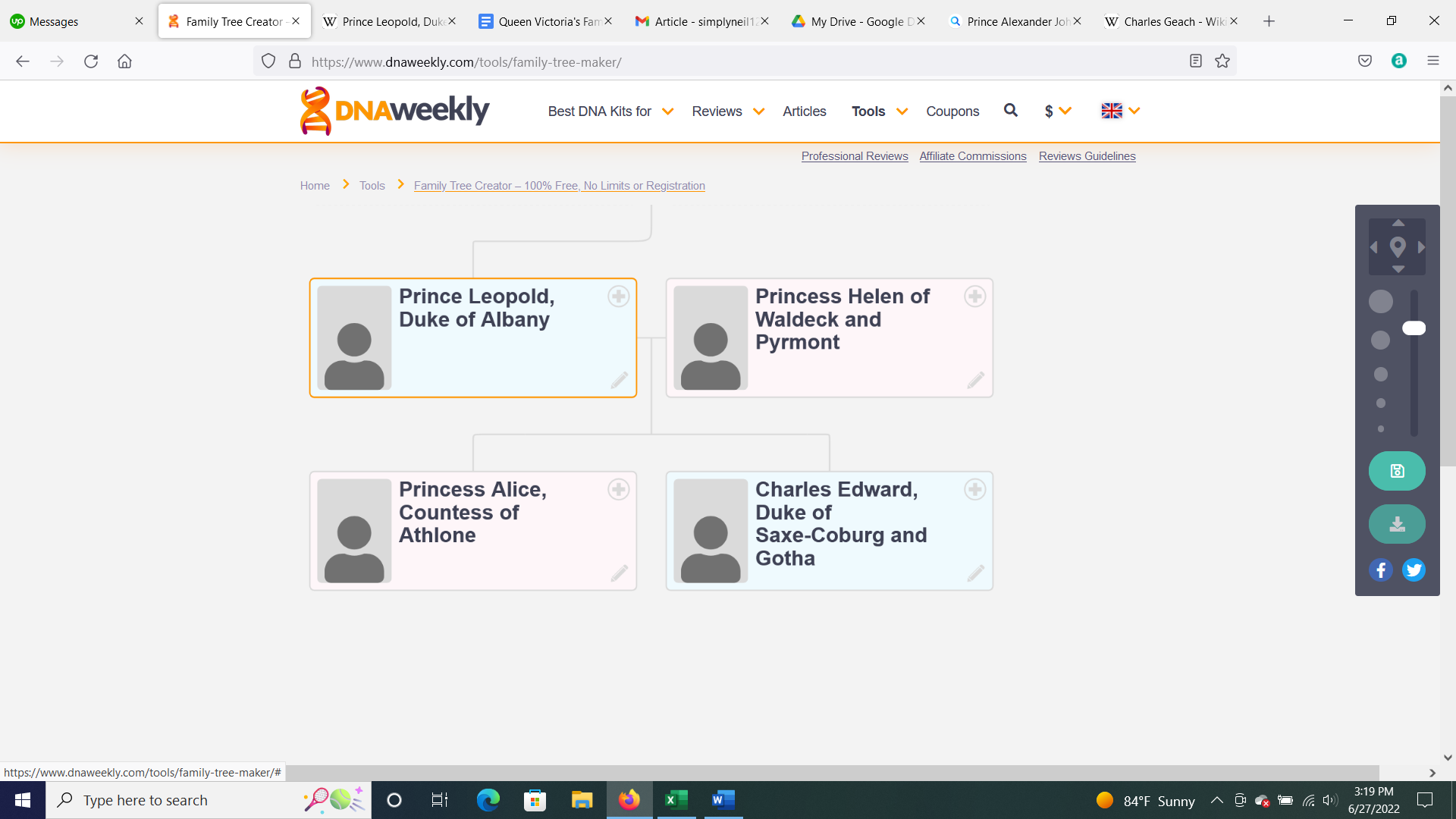 The ninth and final child of Victoria and Albert, Princess Beatrice was born April 14th at Buckingham Palace. In 1885 she would marry Prince Henry of Battenberg with whom she would have four children. Her father-in-law Prince Alexander of Hesse and by Rhine was the maternal great grandfather of Queen Elizabeth II’s late husband Prince Phillip. 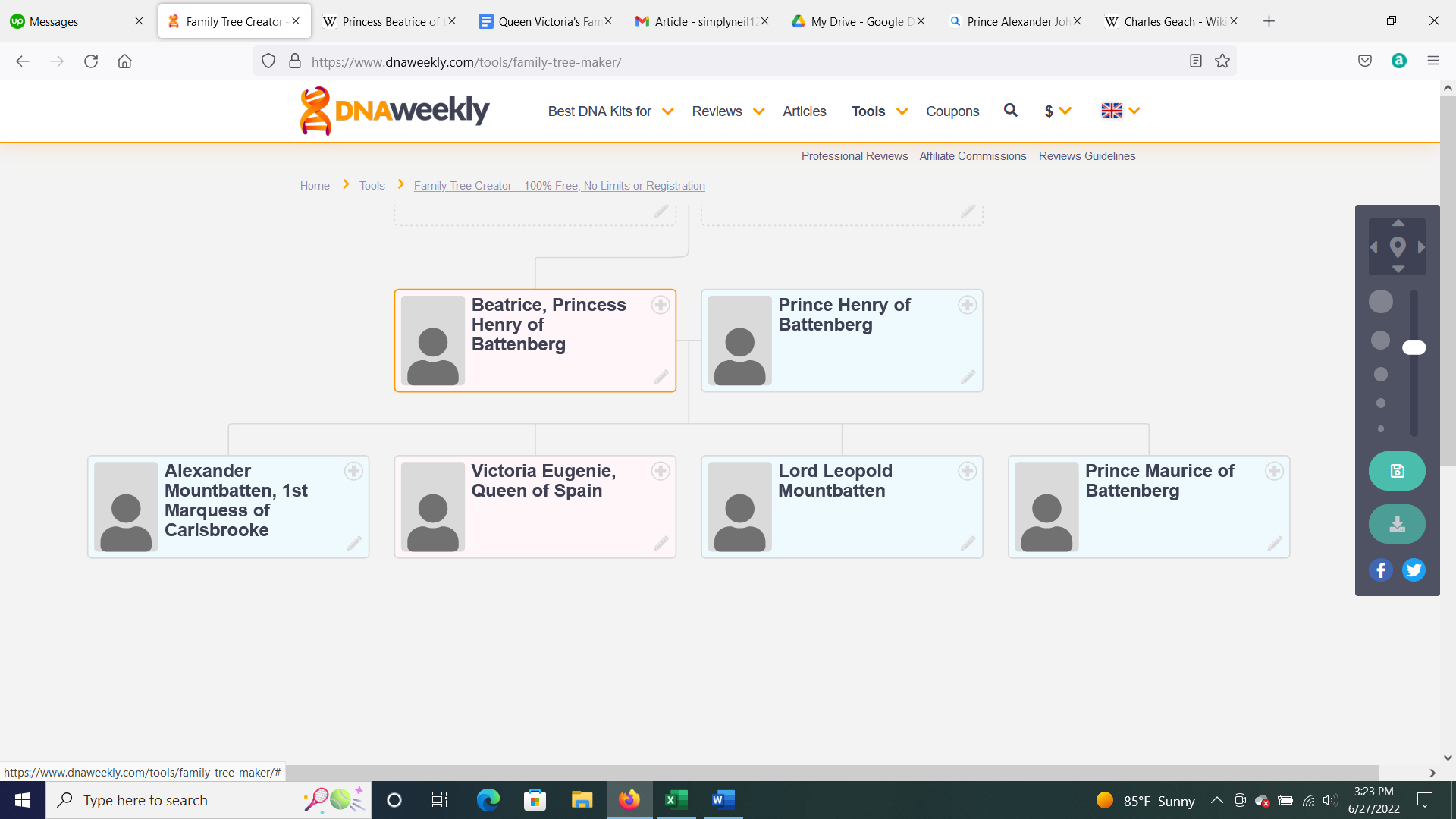 Hopefully this article has given you a better understanding of the Queen Victoria’s family tree and all of the most important people in it.