What are Archaic DNA Matches on GEDmatch?

If you are uploading raw DNA data to GEDmatch, you may find something called Archaic, or Ancient, DNA. In this article, we explain what Archaic DNA matches are, and how they can be used in genealogy research.

If you are just starting out on your AncestryDNA journey you may not yet know a great deal about how valuable your test results can be. Obviously you can get your ethnicity estimate and a whole bunch of cousin matches but what else can you do with it?

Well once you have exhausted the tools that sites like AncestryDNA and 23andMe supply you can actually download your results and use them elsewhere on other sites. One such site is GEDmatch and it is on this site that you can look into something called Archaic DNA.

In this post we will take a look into what archaic DNA is and how it can be used to further our knowledge of who we are and where we come from.

What Is Archaic DNA?

Archaic DNA, which is also referred to as Ancient DNA, is a very valuable substance indeed. All around the globe archaeologists unearth artifacts of this planet's history and from time to time they discover the remains of ancient humans.

These are usually in the form of very fragile delicate skeletons which have been greatly degraded by time and the dirt in which they were laid to rest. Sometimes though if we are lucky we may find a bone or tooth that is in good enough shape to provide us with some existing DNA.

It is thought that the oldest human DNA that has been recovered and sequenced was about 430,000 years old. There has also been DNA recovered from a million year old mammoth so given the right conditions one day we might get back further. 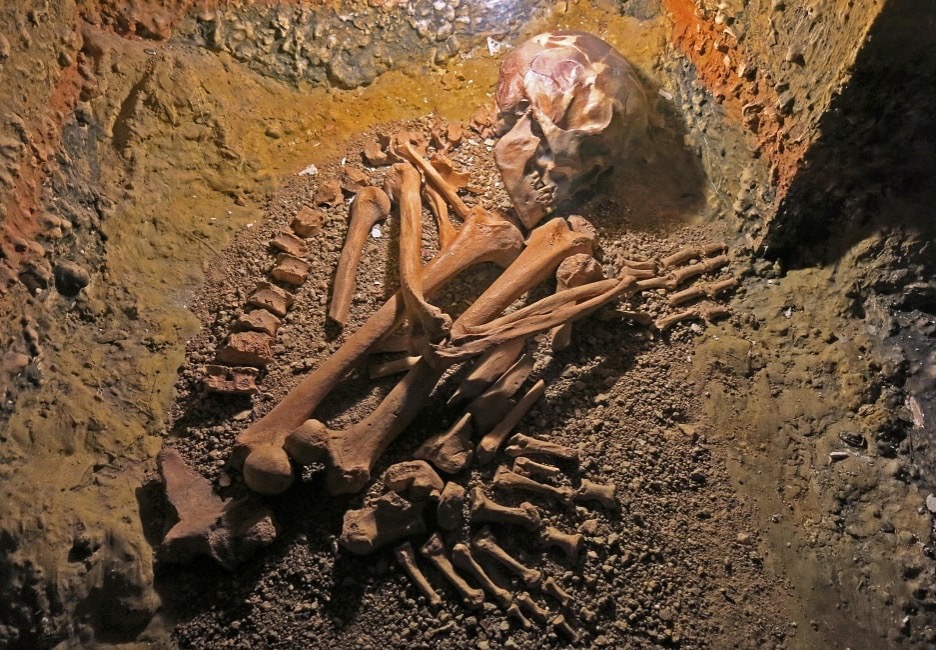 So essentially archaic DNA is that rare substance that we can sometimes get from the remains of our very distant ancestors. There is a very slowly growing pool of these ancient DNA samples which are being used to help understand more about our species.

What Are Archaic DNA Matches on GEDmatch?

These same researchers who have been finding and sequencing these ancient DNA samples have made this information available to GEDmatch. There are a limited number of these samples but using the site we have the chance to compare our DNA against these old samples.

Using the Archaic DNA tool on the site we can look to see if we have any DNA in common with that recovered from around the world. The ages of these samples range from 5,000 – 50,000 years old and come mainly from North America and Europe. 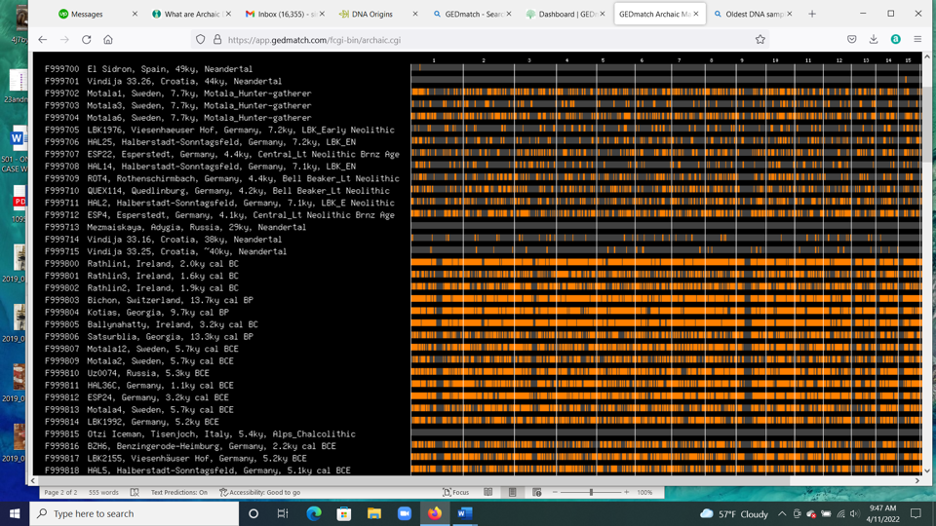 How to Use the Tool

I have definitely checked out this tool myself in the past and was able to find some cool matches in the samples. It was a lot of fun trying and considering this is a completely cost free tool on GEDmatch it must certainly be worth your time.

Starting out at the GEDmatch dashboard you should notice a list of DNA applications on the right of the screen. At the very bottom of this list you will find the Archaic DNA matches tab. Once you click this you will be taken to the next screen.

You can choose to look for larger matches among the DNA up to 10 centimorgans. The default search is set to 0.5 centimorgans which often a match this small can often be just coincidence. The key is to find a level between these numbers by which you can get several matches at the highest segment length possible.

A match at 10 centimorgans in length can be indicative of that sample being from a distant ancient ancestor or at least place your ancient ancestors in the region this sample was discovered. However, It is hard to find a match so high on ancient DNA.

When I tested my own sample against the archaic DNA I found some small matches throughout Europe which included Ireland, Spain and a fair amount of Neanderthal DNA. Unsurprisingly as a British person by birth there were also some Swedish hunter gatherers that I matched to as well. This would be thanks to those wonderful Viking raiders no doubt.

Could These Samples Be From Distant Ancestors?

In the case of the so-called Cheddar man, a skeleton found in England’s Cheddar Gorge dating back between 9100 and 7100 years ago, scientists were able to determine three living modern day descendants.

Does this mean we could prove this with a GEDmatch tool? Well, likely not. Even if we matched at 10 centimorgans with one or more of these matches we would not be able to determine that that individual was a direct ancestor.

The greatest likelihood would be that they were a very distant cousin and that we could have shared a common ancestor with them. This is particularly true of certain samples. Among the many samples available are those found in ancient infants. We might have a notable match to this infant sample but quite obviously they would not be our ancestor.

Are These Matches Useful for Our Family Tree?

The very simple answer to this question is no, they can not really help with our family tree. The vast majority of these samples pre date recorded history and as a result we have no way of knowing who these individuals really were.

The average person could possibly trace their family tree back to the year 1400. Some genealogists, though, might be skeptical of people claiming to have traced their family back so far. It generally takes provable descent from a well known individual to prove beyond this point.

So if we consider that six to seven centuries in the past is pretty close to the average limit we might be able to trace then these archaic DNA samples which are thousands of years old can’t possibly be of help.

The Archaic DNA matcher is a fun little tool which can give you some insight into your very ancient roots. It is very common to see Neanderthal matches and you may also see matches that coincide with your ethnicity estimates as well.

As a genealogical tool it is not really a great deal of help in building your family tree. These samples are from likely distant cousins who died thousands of years ago. Despite people who claim to have proven descent from Adam and Eve we cannot trace back 6,000 years in a family tree.