What is a Fifth Cousin?

Having worked your way through your close matches on AncestryDNA or 23andMe hopefully you were able to pinpoint who they were and how you are related. Close family members who have been tested such as aunts, uncles, siblings, parents or grandparents are easy to track.

The tough connections to make start to come in terms of those cousin matches. Generally, first cousins are not too difficult and sometimes even second cousins fall into place as well. It is those later cousins - third, fourth and fifth that can be troubling. This is especially true of those fifth cousin matches. How exactly are they related to you?

What Is a Fifth Cousin? 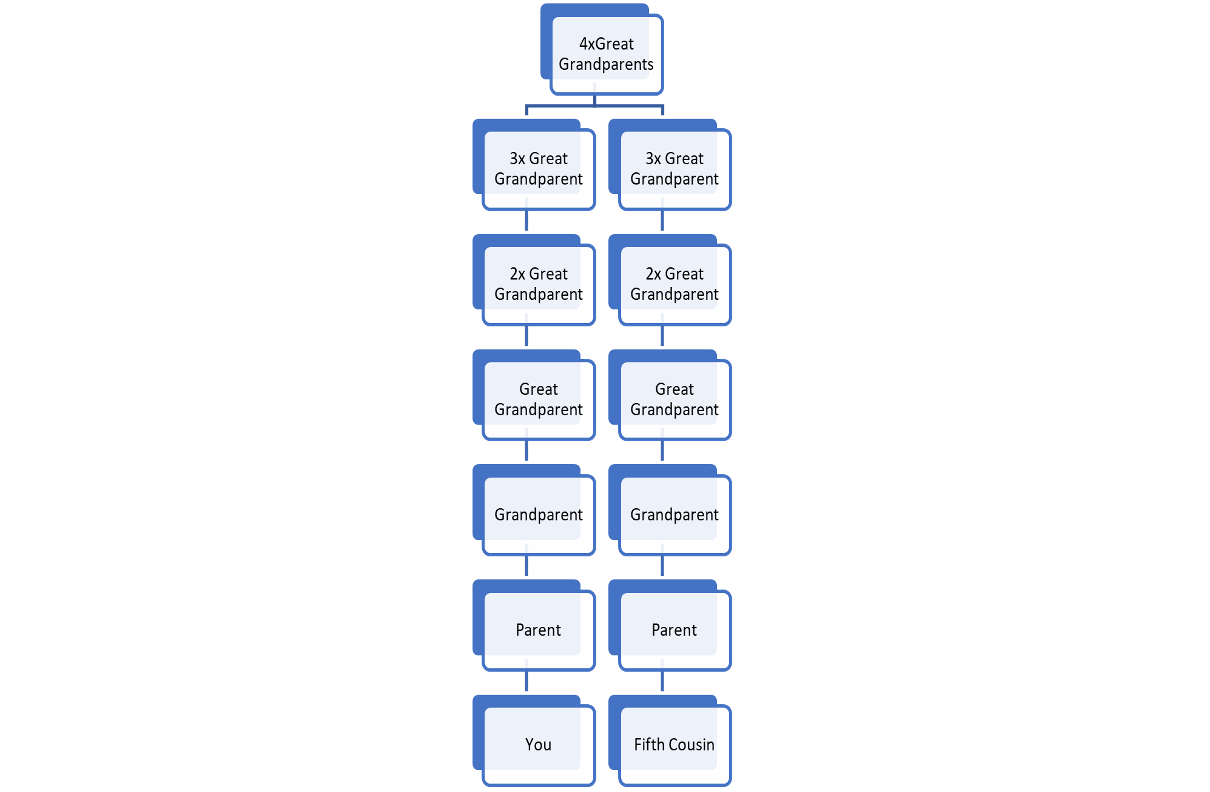 The fifth cousin relationship is considered to be a very distant one. This is because in our everyday life most people would not really know any of their fifth cousins. It is possible in small unchanged communities that fifth cousins may know each other but outside of discoveries on AncestryDNA many of us can’t name a cousin so distant from us.

This does not mean that they are not family to us, although we are unlikely to have many encounters with them. We still come from the same common ancestor but sometimes it can be tricky making that connection.

Another thing to note is that in terms of cousin matches, second cousins are the last level of cousins who will definitely share DNA in common with us. This means that third, fourth and fifth cousins are increasingly more likely to not share any of our DNA.

The average level of DNA that we might share with a fifth cousin is around 0.05%. There is no defined range because the percentages are so small in general. We are most likely to not share DNA with our fifth cousins.

As a result of the small amount of DNA, if any, that we share with fifth cousins, any matches of this relationship from our DNA tests are a small sampling of the actual number of cousins of this level that we have.

How Many Fifth Cousins Do I Have?

As mentioned we could not possibly track down all of our fifth cousins using DNA and to do so with genealogy would be a herculean task. It is estimated that most people may have an average of over 17,000 fifth cousins.

The reason for such a high number is the potential exponential family growth over five generations from 64 sets of great-great-great-great grandparents. Numbers become staggering in the extremes of our family research.

The exact number of fifth cousins of course will vary depending on countries of origin and potential religious or mass conflict events. Regardless, however, it is highly unlikely that we would ever be able to track down all of our fifth cousins.

Variations on the Fifth Cousin

There are some other terms that can be applied to fifth cousins which denote a slight difference in the actual relationship.

A fifth cousin is a person who descends from the same set of great-great-great-great grandparents. They are in the same generation as we are but are considered distantly related. We do not have very much actual DNA in common with them but are technically still family.

With an average of over 17,000 potential fifth cousins out there we are highly likely to have met and even spoken to one of our cousins but not actually know. It is a real eye-opening thing to consider how many descendants our great-great-great-great grandparents have given to the world and we of course are one of them.