What is a Half Cousin?

Historically it was not uncommon for women to die in childbirth and also not unusual for the husband to remarry relatively soon afterwards. It was often the case that a man had several children with one wife and upon her death would go on to have more with a second or even a third wife.

Due to high mortality rates during childbirth, this often led to a relatively high incidence of half-siblings. This term essentially means that they only share one common ancestor. Although this was common in years gone by, it certainly is not markedly less common today.

Women may be more likely to survive childbirth with the advances in medicine but with divorce being more common and children being born out of wedlock it is still not unusual for people to have half-siblings.

It is important to note genealogically that half-sibling relationships have other impacts with regard to the family tree.

What Is a Half First Cousin?

A half first cousin relationship is very simple. These two cousins are the children of half-siblings, meaning that they share only one grandparent in common. Their parents only have one biological parent in common. 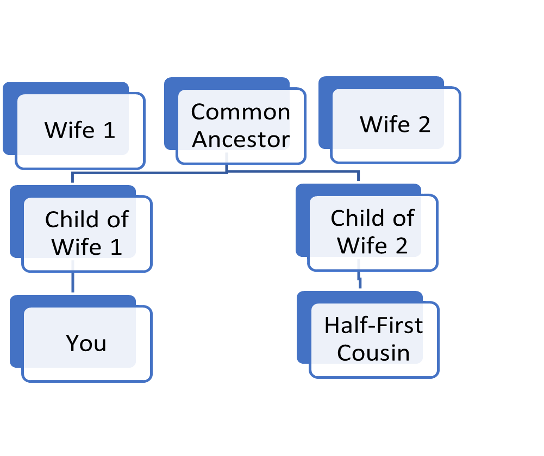 Are Half Cousins Common?

Half cousins are definitely both historically common and increasingly common in the modern-day. The concept of the nuclear family with two parents and however many kids is often considered the religious and social ideal but it does not always work that way.

The loss of a partner through death, divorce or desertion has always been possible throughout history as has the idea of remarriage. It was not uncommon historically and certainly is not unheard of today to have multiple children with multiple partners.

Infidelity within the marriage is also a potential source of half-siblings some of which may only be exposed by DNA testing. As common as half-sibling relationships are, so too are half cousins to an even greater degree.

How Does This Affect DNA?

A half-cousin relationship obviously has an impact on the percentage of DNA you share. The average you might share with a full cousin is about 12.5%. However, given the fact you share only one grandparent in common, this percentage is cut in half to about 6%.

It is important to note that due to DNA recombination, the amount of DNA you share with a first cousin actually ranges from 4-23%. As a result, the range you might share with a half first cousin is between 2-11.5%.

Therefore, these potential low numbers in both the chances of having full and half-cousin relationships can mean that DNA is not reliable to confirm which relationship you share. A low DNA match with your first cousin does not automatically mean that they may be only a half-first cousin. A match in the higher range above 11.5%, though, does tend to confirm a full first cousin match.

Does the Half Cousin Term Pass Down?

Once the “half” term applies to a family line it does pass down the successive generations. Essentially, this is due to the fact that the children of your common ancestors from whom you descend were only half-siblings. Each successive generation of cousins will only ever be half cousins.

The half-cousin relationship may seem complicated but in reality, it is no more complicated than the traditional cousin connection. It all goes back to whether or not the children of your common ancestor from whom you descend were full or half-siblings.