What is a Sixth Cousin?

In the world of cousin relationships, it’s often the closer the better when it comes to understanding just how you are related. First cousins, for example, are the children of your aunt or uncle and in some families, these cousins are your earliest friends in life.

When we get to second cousins it becomes a little more complicated because these cousins are the grandchildren of a sibling of your grandparent. Basically, they are your great aunt or uncle's grandchild. It goes on like this each generation with the number level of the cousin increasing.

It gets really complicated, however, once we reach the sixth generation of separation in the form of sixth cousins. Just how are they related to us?

What Is a Sixth Cousin? 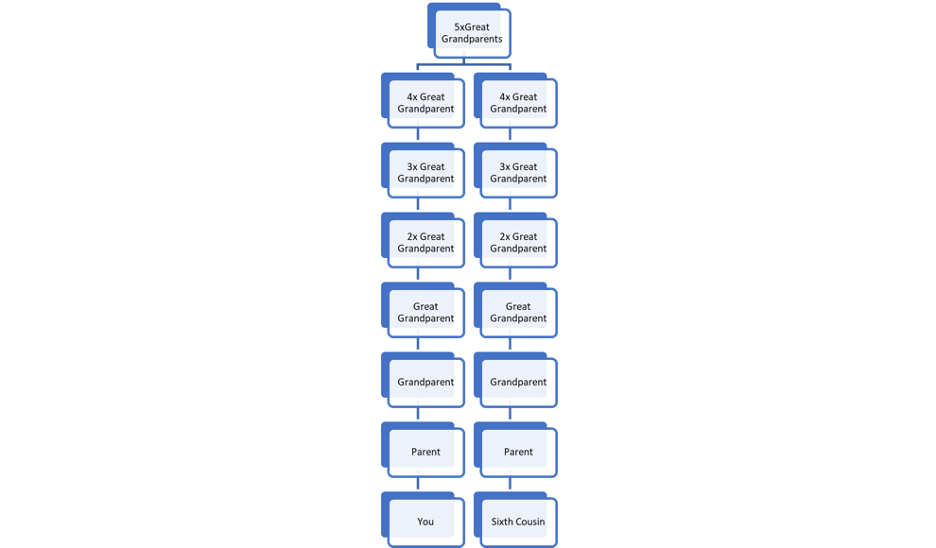 In terms of a family connection, it is highly unlikely that you would meet or knowingly encounter a sixth cousin. Even at a huge family reunion the odds of a sixth cousin being in attendance are small. Society, in general, is not that tight.

The distance socially is matched in our blood as well. The further we get away from our common ancestors the less DNA we share with our cousins. In a perfect world, the DNA we share with a cousin would half with each generation meaning on average we might share 0.025% of our DNA with a sixth cousin.

With such a low expected amount of shared DNA and the realistic nature of recombination we actually share little to no DNA with the vast majority of our sixth cousins. So when you factor all those sixth cousin matches on AncestryDNA or 23andMe there are likely thousands who have either not tested or share no DNA with us.

How Many Sixth Cousins Do We Have?

If you were considering the possibility of tracing all of your sixth cousins this next statistic may make you think again. It is estimated that we could have up to 174,000 sixth cousins which may seem astronomical and impossible to track.

Variations on the Sixth Cousin

There are some other terms that can be applied to fifth cousins which denote a slight difference in the actual relationship.

The sixth cousin relationship is considered a very distant one. We generally do not share a great deal of DNA if any at all with our sixth cousins but we do share common ancestors. Without those ancestors, neither of us would be here so in that we are at least connected.