What is the Aegean Islands on Ancestry DNA?

If you already know that you have ancestors that were born in what is known as the Aegean Islands region then it likely would not surprise you to see this as a result of your AncestryDNA ethnicity estimate. However, it may have come as a surprise to you to discover you have DNA from this region so you will naturally be interested in learning more about it.

In this post we will take a look at where this region is geographically speaking, the history of the people that originate from there and what it means to have Aegean region DNA.

Where Is the Aegean Islands Region?

Nestled between Eastern Greece and Western Turkey is the Aegean Sea. This elongated embayment in the Mediterranean separates Europe and Asia. There are around 2,000 Islands in the Aegean sea of varying sizes many of which are inhabited.

The recently defined Aegean Islands region on AncestryDNA appeared after the September 2021 update. Previous to this the region fell mainly within Southern Greece. The improvements in DNA technology have made it clear that the Aegean Islands exhibit some distinct differences from the Greek and Turkish regions that surround them. 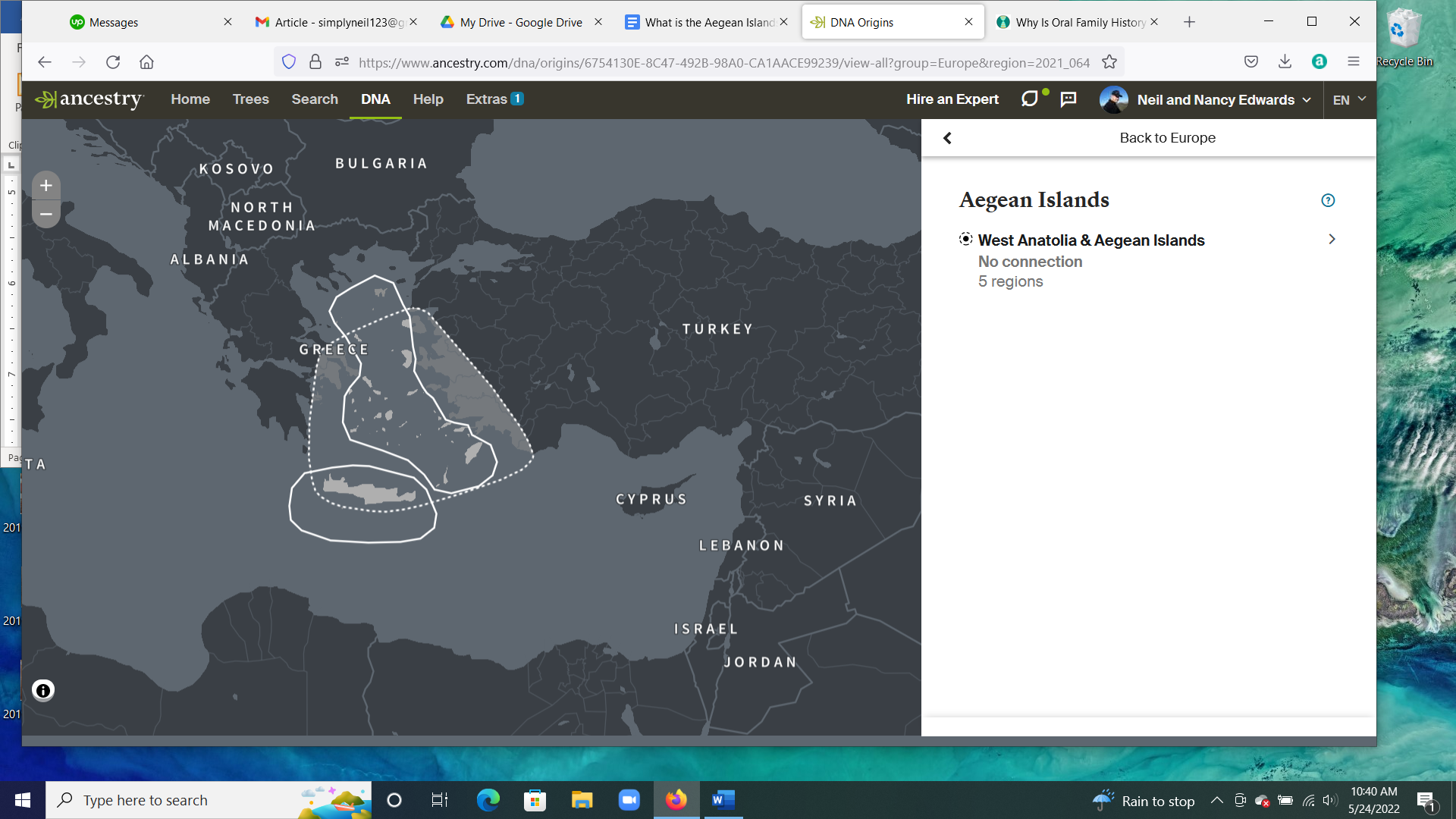 There is an area of southeastern mainland Greece which exhibits the DNA traits of this region and a swath of the western coast of Turkey also has a large number of the population with DNA from this Island region.

Situated to the north of Libya and Egypt this series of Islands, just over 1,400 of which are within the Aegean Islands DNA region, has seen some interesting history.

The Subregions of the Aegean Islands Region

Those who have DNA from one of these subregions may be able to more closely pinpoint where their Aegean Islands ancestors may have first originated.

History of the Aegean Islands

The earliest civilizations in the Aegean Islands region arose during the Stone Age 7,000 – 3000 BC. They likely migrated from mainland Greece. The most notable Aegean region civilization however developed on the Island of Crete between 2700 – 1420 BC.

The Minoans as we know them are considered Europe’s first advanced civilization and survived for over 1,300 years. It was only the expansion of the Mycenaean civilization who originated from mainland Greece that brought the Minoan rule to an end around 1420 BC. 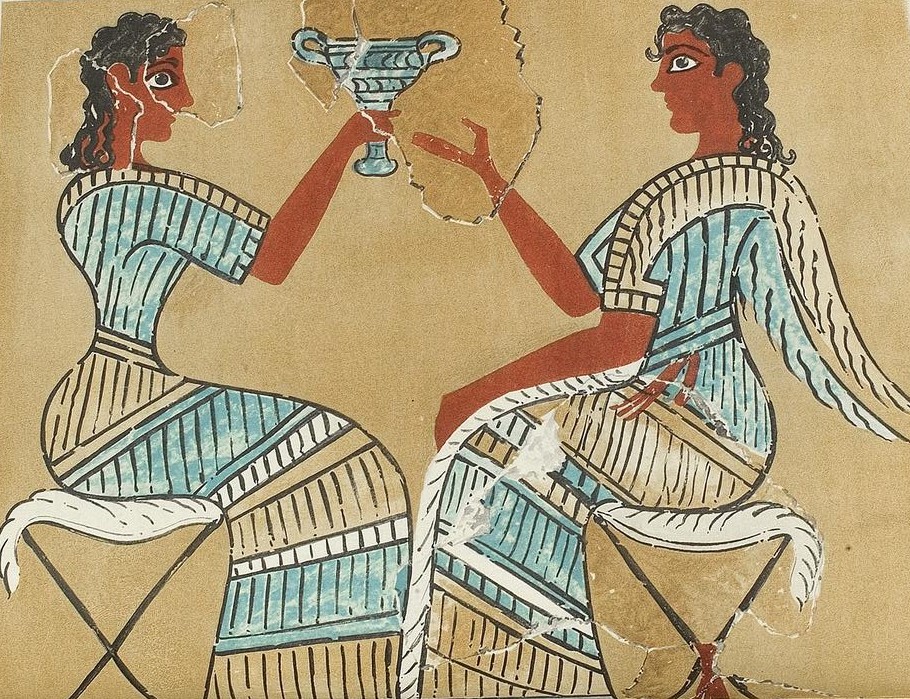 Several waves of mainland war faring would change control over Crete and other Aegean islands. Ruling powers would often disagree with each other and almost constant wars were fought changing the allegiances of islands on a regular basis.

Until around 71 BC it had always been Greek infighting but it was next the turn of the Roman Empire. After 3 years of conflict Crete finally fell to the Roman Empire. The ensuing few centuries would see attacks from the Vandals, Slavs, and Arabs

In 820 AD after almost 900 years of Roman rule Crete was taken by Islamic forces originating from the Iberian Peninsula. After several decades however the Byzantine Empire reclaimed the Island.

Control over the Islands would switch multiple more times over the centuries with Crusaders, Venice and the Ottoman Empire all having control at various times. This unique mix of historic occupations has likely shaped the unique DNA of the Aegean Island region. Greek at its heart but with influences from Africa, Spain and Italy.

How Did You Get Aegean Island Region DNA?

If you have a noticeable amount of DNA from this region it is likely that you have an ancestor somewhere in the past who came from one of the inhabited Islands of the Aegean or from either mainland Greece or Turkey.

Depending on how recent these ancestors were you may have a specific subregion mentioned in your results. A more distant ancestor is often harder to pinpoint in terms of location due to a smaller amount of DNA evidence.

In the case of more distant ancestors you might discover an ancestor coming from another European or Asian country whose own ancestors moved there from the Aegean. Trade would often take people further away from their home islands making it harder to trace back to your original Aegean ancestors.

How Can I Trace My Aegean Island Region Ancestors?

With all things genealogy-related there are certain steps you need to take to start any journey toward tracing your ancestors from any region. Depending on how recent your Aegean Island ancestors are to be found in your tree this can be easy or it can be very challenging.

The first step to take is to talk to your oldest family members, specifically those who likely associate with Greek, Turkish or Aegean ancestry. This is always the best source of information especially if they were born in another country or knew older family members who were.

Using your information from senior family members, start building your tree on a site like Ancestry and try to track down records for your earliest immigrant ancestors. Ship manifests or citizenship documents can help greatly in finding out where your ancestors may have come from.

Try and make full use of the AncestryDNA tools such as Thrulines and common ancestors. In order to do this, you need to ensure you attach your DNA results to your tree.

The Aegean Islands have a long and varied history as part of Ancient Greece. They have faced invaders from all directions over the centuries and with extended periods of occupation by major Empires they have developed a distinct DNA profile.

Europe's first substantial advanced civilization arose on the Aegean Island of Crete meaning that possessing DNA from this region should be a source of Pride.