Why Does My Ancestry DNA Ethnicity Estimate Change?

If you have taken an AncestryDNA test in the past, you might have seen that sometimes when you go back, the ethnicity estimate has changed. In this article, we explain what the estimate changes and what it means for your results.

If you took your AncestryDNA test a few years ago you may have noted that from time to time when you check back in you see the results have changed slightly. What does this mean? Well, let me first say worry not your DNA is not changing, that doesn’t happen, but there are some changes going on.

The science of DNA testing is a fairly new one dating back only to the early 1980s. In fact, the first time DNA testing was used to solve a crime was in England in 1986 when it helped solve two serious violent crimes.

Considering this science is less than 40 years old it is hardly surprising that it has gradually changed and improved over the decades. It was a company called GeneTree that was first to offer directly to the customer DNA testing for genealogical purposes. This started in 1997 and eventually after several sales over the years Ancestry.com purchased their business in 2012.

With genetic genealogy being less than 30 years old it is even more evident why there may be changes. The simple fact is that as databases grow and more DNA projects come to completion around the globe we have a better understanding of the genetic makeup of various world regions.

The Changes in my DNA

I wish I had taken screenshots or recorded all of the different updates of my own Ethnicity estimate because today I can’t remember the exact values. I do know, however, that the estimate I have today isn’t technically that different from my first results but it is much more accurate.

As I recall, on my first estimate I was considered 95% British, a small amount of Scandinavian and very oddly 1% Native American. That last one really didn’t seem to make much sense for a guy who was born and raised in Shropshire, England.

Almost every year AncestryDNA performs an update of their systems adding new regions by splitting up larger ones thanks to a better understanding of the DNA. Very quickly that 1% Native American result disappeared so this was seemingly an error that was rectified with better understanding.

Today my makeup has been refined quite extensively and contains these ethnicities: 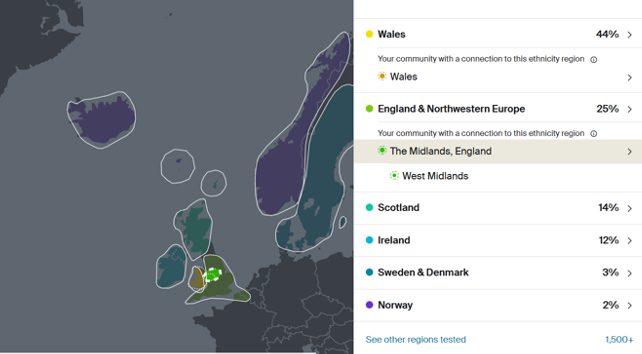 Having extensively researched my family tree I can attest to the accuracy of at least 69% of this DNA. As far as I can trace back my family comes from just three counties in the UK, one in Wales and two in England, all of which border one another.

The Scottish and Irish DNA I can’t quite locate but it is likely that at some point in the distant past I have ancestors from these regions. Also, the Scandinavian DNA is not surprising considering the massive presence of Vikings in England between 793 – 1066 AD. I undoubtedly have some distant Viking ancestry.

Why Exactly do our Estimates Change?

The first thing we have to remember when it comes to our ethnicity DNA tests is the term estimate. This is not an exact science even if the results seem to match perfectly at times with your own genealogical research.

At the testing lab, our DNA is compared to millions of other samples in search of segments of DNA that are found most notably in certain geographic regions. If we have large or numerous sections that are found in specific regions the company's algorithms calculate this as a percentage.

The higher the percentage we are given in the estimate the more likely we are to have had a recent ancestor with deep genetic connections to that country or region. This is just an estimate of course but with each new update, the accuracy does improve.

As AncestryDNA gathers more and more tests for their database the quality of their base reference samples improve. In terms of my own DNA, Ancestry suggests that I have deep genetic connections to the West Midlands of England. This is where I was born and a lot of my ancestors came from this region as well.

With each successive update to their DNA databases, Ancestry has honed in on my ethnic genetic makeup. Of course, mine is a little vanilla in terms of diversity. Those with a more diverse heritage will also have seen more refined results over time and hopefully will see more the next time AncestryDNA updates.

How Do I Know When my Estimate Was Last Updated?

Generally speaking, anytime that you log in to view your ethnicity estimate on AncestryDNA the results you see will be from the latest update. If you do want to know when that update was performed it is very easy to locate this information.

As a fun tip if you click on the (i) next to the updated date you can find out more about why things have changed in your estimate and actually review your previous results. In my case, it was somewhat similar. I was 45% England and Northwestern Europe, 40% Ireland and 15% Scotland.

There was no mention of Wales as a specific region at that time but the Ireland, England and Scotland regions all overlapped into Wales. So some of the DNA that was previously assessed as English, Irish or Scottish was later found to be from Wales.

It is also notable that there was no Scandinavian listed in the previous result but not only did I find it in the update but it was also present in my very first result years ago. Again this is a sign of how they view DNA with each subsequent update.

The DNA does not vanish or appear out of nowhere it is all down to the understanding of where the DNA really originates from.

What About Missing DNA?

Sometimes people know for certain that they have an ancestor from a particular ethnic group but this does not show up in their estimate. This can shake the confidence some people have in these tests but sometimes it is not the fault of the test itself.

What we may not realize is that due to the nature of DNA inheritance there is a possibility that we may not inherit DNA from an ancestor as close as a great-great-great grandparent. We may know that ancestor to be from Italy or of African descent but it is possible that we have none of their DNA in our genes.

Ethnicity tests can only find what is in our DNA but this does not always reflect all of our ancestors. Just because we do not have their DNA does not mean they are not our blood ancestors merely that we do not share genes.

AncestryDNA updates its results almost annually to help give us the most accurate assessment of our ethnic heritage. It has come a long way over the past few decades and will likely continue to do so.

We do not have DNA from all of our ancestors but these ethnicity estimates can help pinpoint where those who are represented in our genes may have come from.