If you are a history buff or perhaps enjoy musical theater and want to learn more about the man behind the central character of the hit stage show Hamilton in this post we will discuss his family. The story of Alexander Hamilton is one that has been shrouded in certain levels of mystery but one thing is certain, he worked for what he got.

Who Was Alexander Hamilton?

Most people know Alexander Hamilton as an American revolutionary, statesman and a founding father of the United States. What many may not know is that he also founded the country's financial systems, the U.S. Coast Guard and the New York Post newspaper among many other things.

There is some conjecture regarding what year Hamilton was actually born with some suggesting 1755 while others believe it to be 1757. It is certain however that he was born in the British Leeward Islands which today are known as St. Kitts and Nevis.

As a child Alexander Hamilton was orphaned at a young age but was taken in by a wealthy merchant. Upon reaching his teenage years with the help of local patrons Hamilton was sent to New York to further his education.

As a student he wrote opinion pieces in support of the Continental Congress using a pen name and also started to become involved in the militia at the start of the Revolutionary War. He became an officer of the artillery working his way up to being a senior aide to General George Washington himself.

After the war Hamilton was elected as a representative for New York and his career in politics took off. Stints in the Treasury and as senior officer in the U.S. army also followed suit.

Alexander, along with his older brother James Hamilton Jr., was a child born out of wedlock. Their father James Hamilton Sr. was a Scotsman who was the fourth son of Alexander Hamilton the Laird of the Grange in Ayrshire. Hamilton’s mother was a married woman of English and French descent by the name of Rachel Faucette.

Faucette was married to a Dutch or German merchant by the name of Johann Michael Lavien with whom she had one son. Peter Lavien, was Hamilton’s half brother and was left behind with his father when Rachel Faucette left their home in St. Croix to settle in St. Kitts.

It was in St. Kitts that Rachel met James Hamilton Sr. and they would soon move together to Nevis. Not long after their sons were born James Sr. deserted Rachel and the boys claiming that he wanted to spare her charges of bigamy. Her husband was suing for divorce on the grounds of adultery and desertion.

Rachel would return to St. Croix with James and Alexander opening a small store to help her support herself and her boys. She would later contract yellow fever which would take her life leaving the boys essentially orphans.

Matters were made worse as Rachel's former husband Johann Michael Lavien seized her estate and the few valuables that remained to her after her death. Most of the property was auctioned off but a friend to the family purchased the family books and gifted them to James and Alexander. 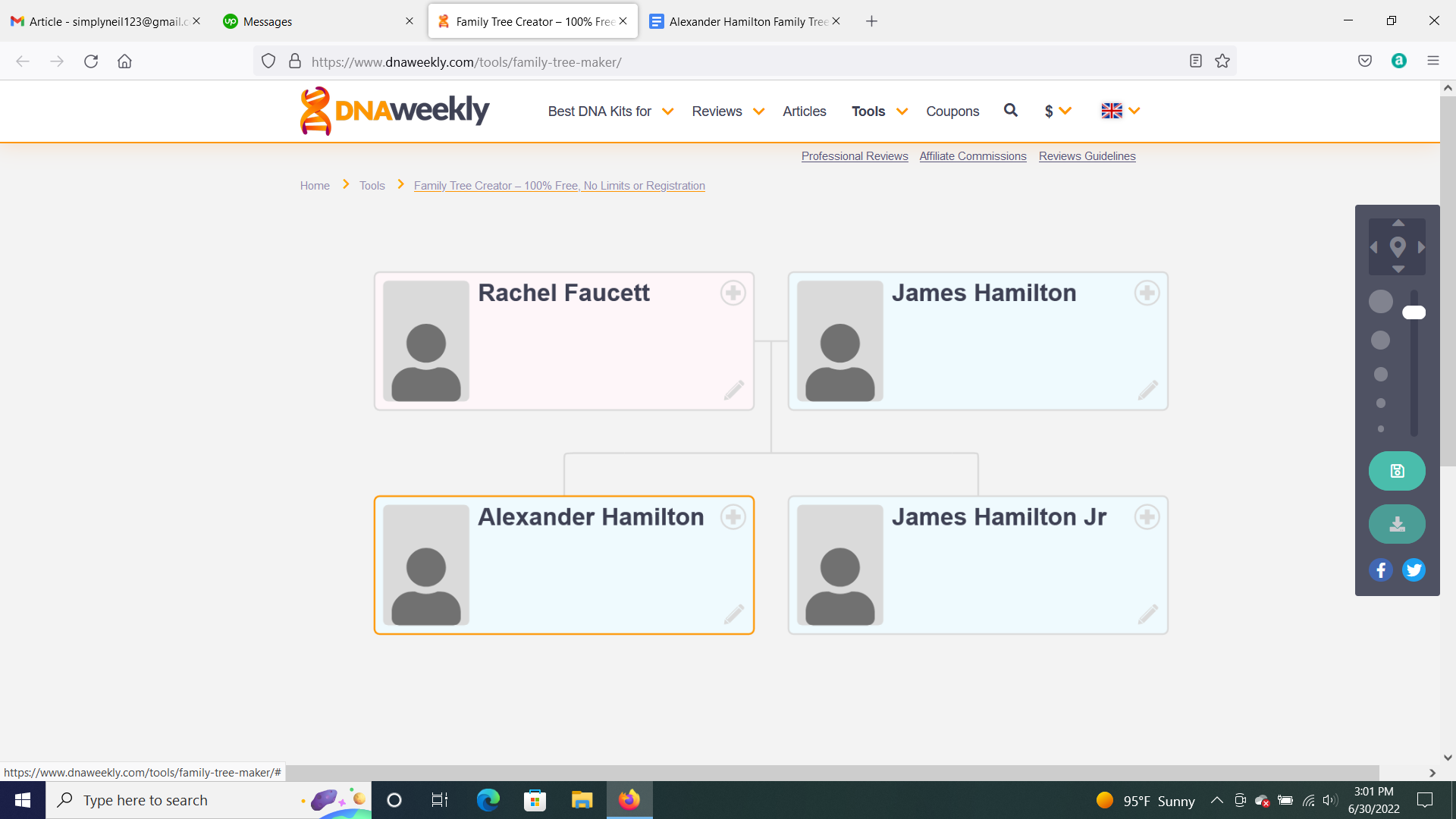 Hamilton’s Wife and Her Family

Some time during the Winter of 1779-1780 Alexander Hamilton would meet Elizabeth Schuyler the daughter of General Philip Schuyler and Catherine Van Rensselar. They would marry on December 14th at the Schuyler family mansion in New York.

His father-in-law Philip John Schuyler was born in Albany New York on November 20th 1733 the son of Johannes Schuyler, Jr. and Cornelia van Cortlandt. He was the third generation of an immigrant Dutch family.

After a long distinguished military career Schuyler also became a senator for New York and the first surveyor general for New York as well.

Hamilton’s mother-in-law, Catherine Van Renseller was also born in Albany New York to Col Johannes Van Rensselar and Angelica Livingston. She was a Revolutionary War socialite and also the 2x great granddaughter of one of founders of New Amsterdam, Kiliaen Van Rensselaer. 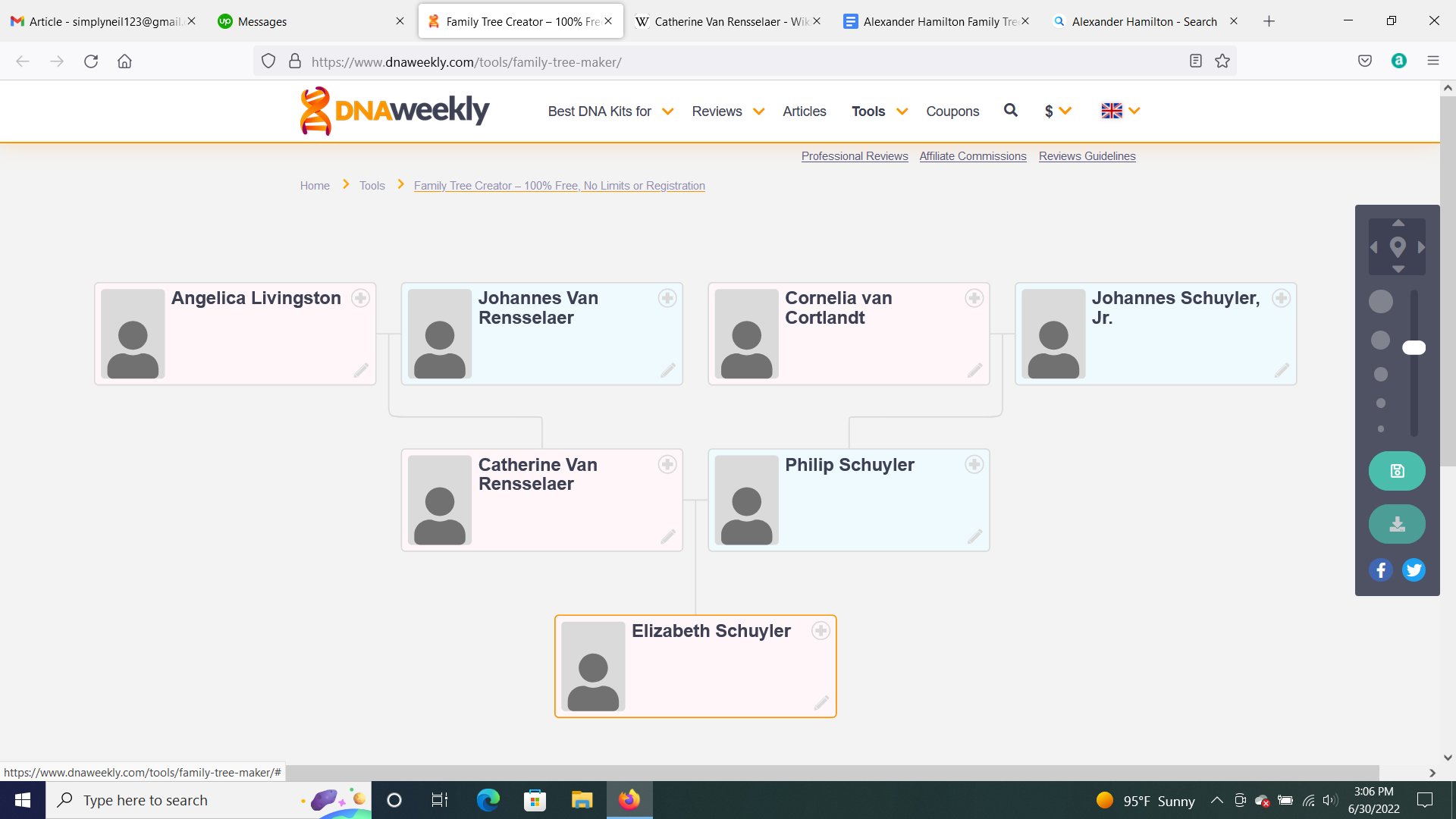 Little is known of Hamilton’s mother Rachel Faucette except that she was born of French and English descent. There are rumors that she may have been of mixed race although documentation of the time does not really support this.

It is believed that her parents may have been Jean Faucette and Mary Uppington but this is not certain and little is known about these individuals.

Together Alexander Hamilton and his wife Elizabeth Schuyler had 8 children between 1782 – 1799. There were six sons and 2 daughters.

The eldest son of Alexander Hamilton, Philip was born in Albany New York on January 22nd 1782. His father once wrote that his son's birth was “attended with all the omens of future greatness.” Alexander truly expected great things from his first born but sadly his reading of omens must have been faulty.

In 1801 a New York lawyer by the name of George Eacker made a speech that included false claims regarding Alexander Hamilton. Just four months later the 19 year old Philip encountered Eacker at a play in New York and during the encounter Eacker insulted Philip provoking him into demanding a duel.

Philip Hamilton would ultimately lose this duel and was rushed to the offices of Dr. David Hosack but would succumb to his injuries. Coincidentally, this was the very same doctor that Alexander Hamilton would be rushed to upon losing his own duel 3 years after Philip's death.

The second child and first daughter of Alexander Hamilton, Angelica was born on September 25th 1784. Described as a sensitive and musical young girl, the death of her older brother Philip in a duel had a profound effect on her when she was 17.

The breakdown over her brother's death essentially left Angelica in a state described as “eternal childhood.” The young woman could not function as an adult and was cared for by her mother until she herself grew too old to care for her disturbed daughter.

It fell to her siblings to try and help care for Angelica who would outlive her mother by only three years. In her later years she talked non-stop of her music and of her brother Philip as if he still lived with little attention to anything else.

The third child and second son of Alexander Hamilton, Alexander Jr. was born in providence New York on May 16th 1786. After completing college Alexander Jr. became an apprentice to Stephen Higginson in his Boston law firm.

Alexander Jr. took a short break from the law when he travelled to Spain around 1811. He joined up with the forces of the Duke of Wellington in his fight against Napoleon in Portugal. The resulting training he received during this conflict led him to return home and take part in the war of 1812 where he was commissioned as a captain.

Alexander married in 1817 Eliza P. Knox the daughter of New York’s leading merchant William Knox. The union was never blessed with children however so Alexander Jr. died without issue.

The fourth child and third son of Alexander Hamilton, James Alexander was born on April 14th 1788. Like his father before him James followed the legal profession and also entered politics as well.

In 1810 James married Mary Morris the daughter of Robert Morris and Frances Ludnam. She was also the granddaughter of Richard Morris, a notable New York politician. Together Jame and Mary had five children Elizabeth, Frances, Alexander, Mary and Angelica. 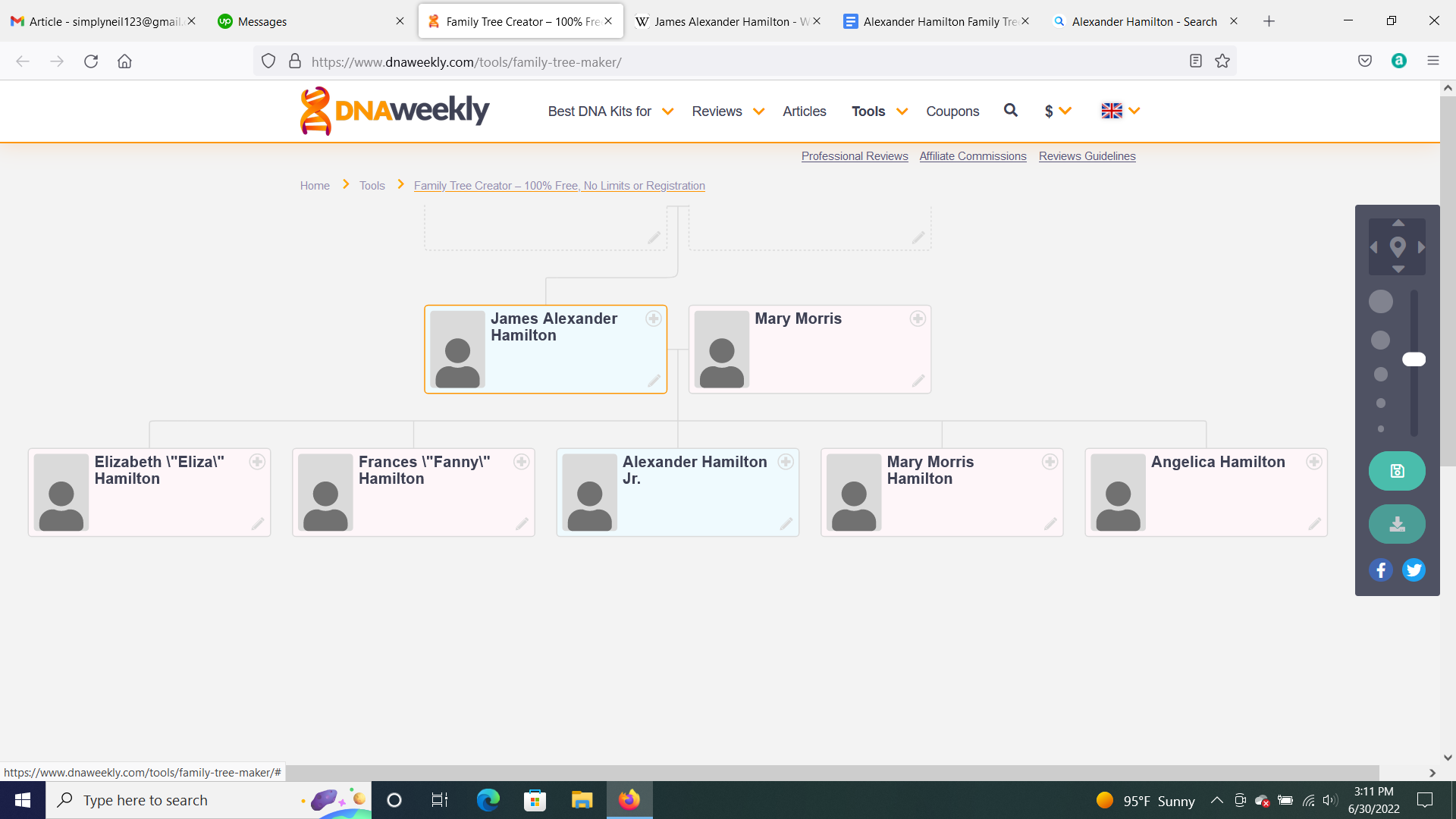 The fifth child and fourth son of Alexander Hamilton, John Church was born in Philadelphia on August 22nd 1792. Entering into the legal profession like his father and his brothers John was also a historian, and a biographer.

The sixth child and fifth son of Alexander Hamilton William Stephen was born on August 5th 1797 in Albany New York. In 1814 William started to attend West Point military academy but would last only three years before resigning.

He would later move to Illinois entering the world of politics and also establishing some lead mining projects as well. William was described as a man of rough and garish appearance and never married. Ultimately he would die at the age of 53 of suspected cholera in Sacramento California.

The seventh child and youngest daughter of Alexander Hamilton, Eliza was born in New York City on November 20th 1799. She was described as a sickly child who caused Alexander some concern. At the age of four she, along with her living siblings, all attended their father's death bed so he could say goodbye.

In 1825 Eliza married New York merchant Sidney Augustus Holly who himself was one of eight children of landowner David Holly of Stamford Connecticut. Eliza and Sidney remained together until his death but had no children.

Just a year after Alexander Hamilton’s first born son Philip died in a duel his wife gave birth to their eighth child and youngest son who they named Philip in his older brother's honor. Referred to as little Philip he was born in New York City on June 1st 1802.

Philip entered the law profession like his father and would also work under his older brother James. One of his most notable cases was his successful attempt to convict the pirate Charles Gibbs.

Philip was a staunch abolitionist and assisted the underground railroad by concealing at least one known runaway slave in his cellar. In 1842 he would marry Rebecca McLane the daughter of senator Louis McLane. Together they had two sons Louis McLane Hamilton and Allan McLane Hamilton. 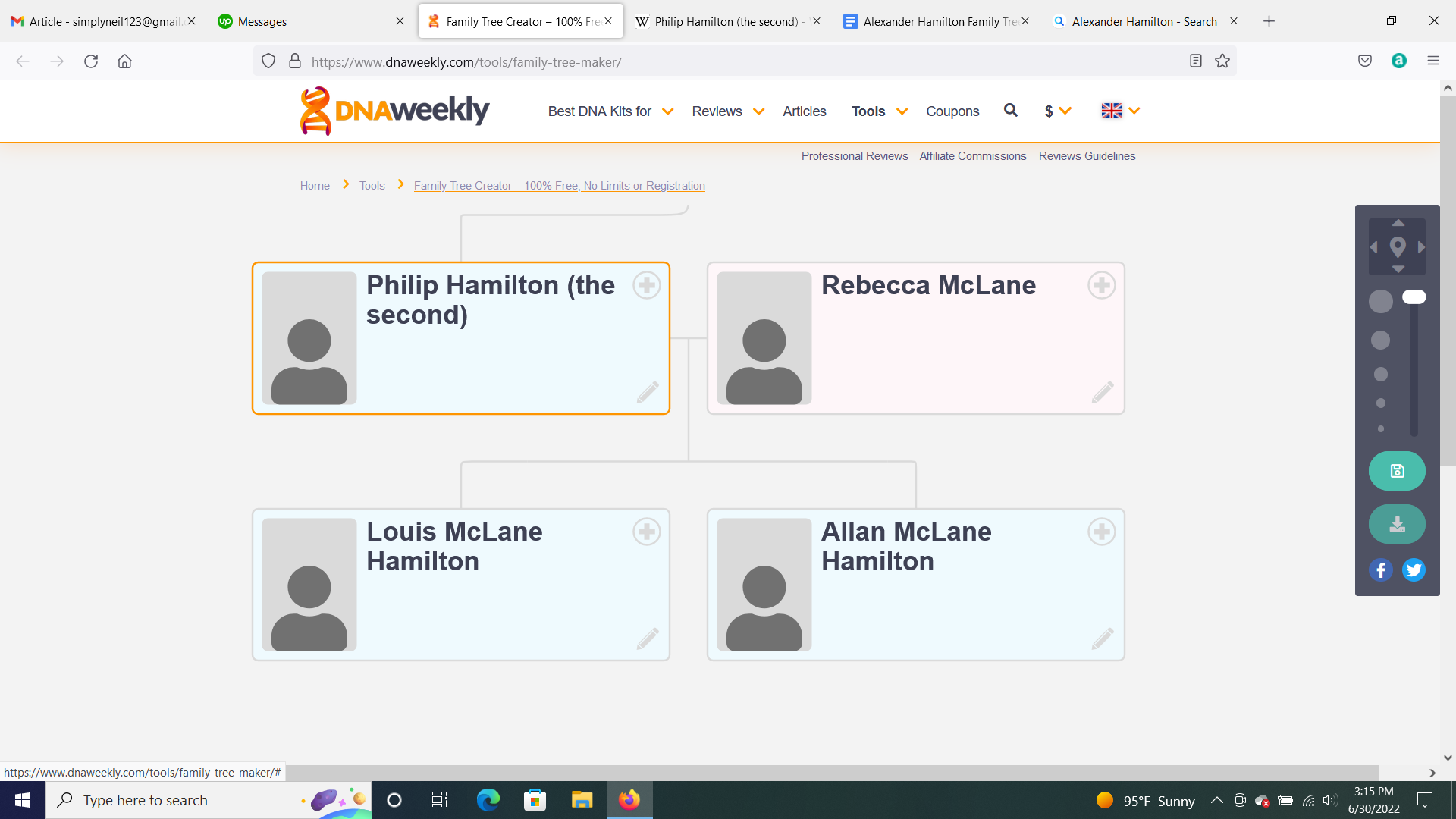