What do my Y-DNA Haplogroup J: J1 and J2 Results Mean?

If you have recently taken a Y-DNA test to determine your haplogroups you likely have some questions regarding your results. Essentially you are looking at a small collection of letters and numbers which may not mean a great deal to you right now.

In this post we will look specifically at haplogroup J and its subgroups J1 and J2. We will discuss where they originated and what it means for you to have this as a haplogroup.

What Is the J Haplogroup?

In the world of Y-DNA haplogroups there are around 20 lettered main groups ranging from A to R. As you might imagine A is considered the oldest Y-DNA group and obviously R is a more recent addition to the human genome. The J Haplogroup lands pretty much in the middle of the Y-DNA haplogroup timeline.

People who possess this J haplogroup can be found all around the globe but genetic scientists suggest that it likely first originated in Western Asia. It is a specific mutation which originates from the I-M170 haplogroup and is also commonly known as the J-M304 mutation.

Chronologically speaking it is believed that the J haplogroup emerged around 43,000 years ago. It can be found in dense concentrations today on the Arabian Peninsula, as well as many of the northern and southern coastal regions of the Mediterranean Sea. 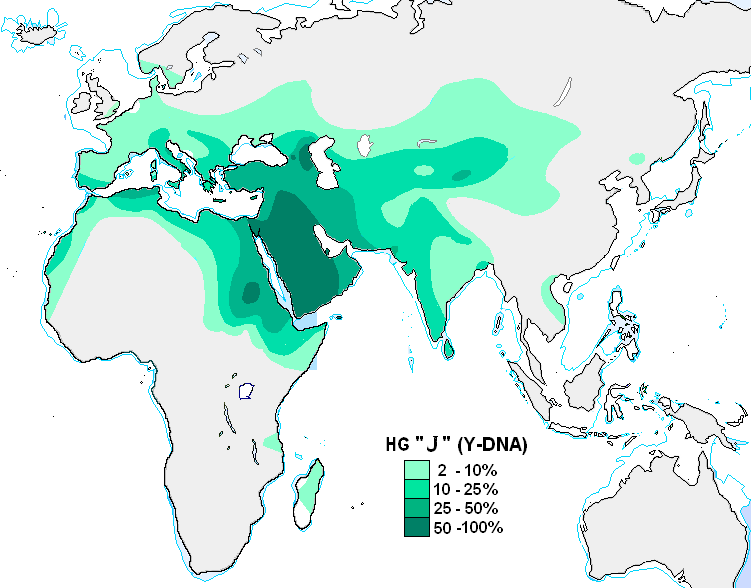 Early in the development of the J haplogroup there was a major split which created J1 and J2. The J1 mutation is defined as J-M267 which is also a more common name for this sub haplogroup. It was about 30,000 years ago that the J1 mutation occurred which means that J1 and J2 haplogroup holders have not shared a common direct line male ancestor since that time.

The heaviest concentrations of the J1 haplogroup today live in Iraq, Iran, Yemen, Saudi Arabia and Qatar. There are also certain ethnic groups such as Bedouins, Ashkenazi Jews and Arabs who have a high prevalence of this haplogroup.

Beyond the Arabian Peninsula densities of this haplogroup tend to diminish but there are some unusual densities found further afield. Sudan for example shows a high frequency of the J1 haplogroup with around 70% of makes tested possessing this J mutation.

Other smaller densities occur throughout the coastal Mediterranean in both European and African communities. This is indicative of the migration path taken by those early possessors of the J1 haplogroup. 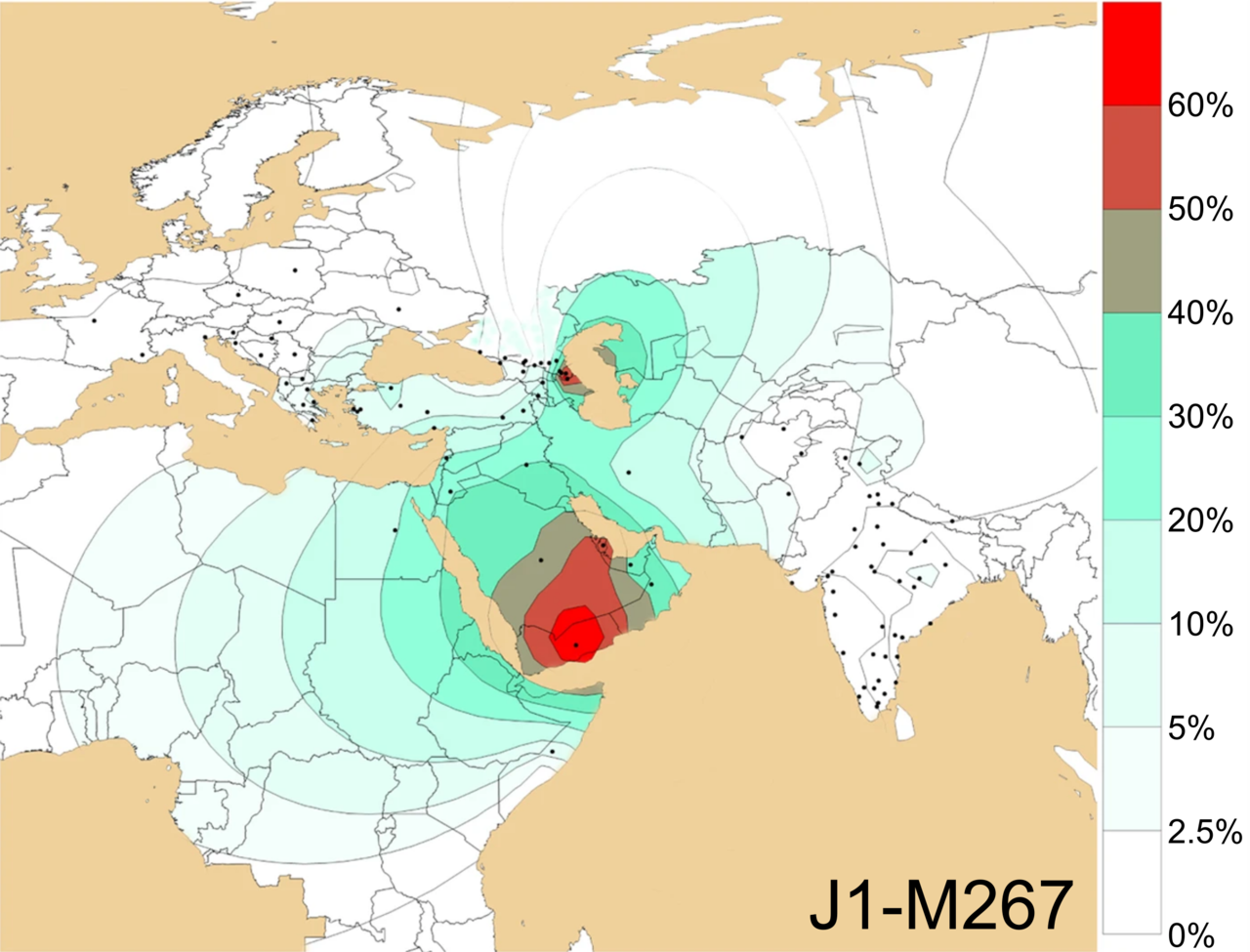 The J1 subgroup known as J-P58 is a very common one found in those with Jewish ancestry. There is also a further sub branch known as J1-B877 which has had an important impact on the understanding of tracing genealogy to specific lineages.

This J1-B877 subgroup has been traced back to the so-called Jewish priestly class It is thought the common ancestor from whom this specific mutation originates may have lived around 3,200 years ago. Modern living holders of J1-B877 are referred to as Cohanim.

It was the presence of this particular subclade that proved a Jewish connection to the Lemba tribe in Africa who have long practiced the Jewish faith but with seemingly no traceable connection. The presence of the J1-B877 subclade however within the males of the tribe made it evident that such a connection must exist.

This is the other major subgroup of the J haplogroup and it has followed much the same migratory path as J1. The specific mutation that formed the J2 haplogroup is known as J2-M172 and today has a differing geographical concentration to the J1 haplogroup.

It is mainly centered around the region referred to as the fertile crescent. This includes Iraq where it shares space with the J1 haplogroup but also includes the Uygars and Uzbeks. It can also be found in pockets along the northern Mediterranean as far west as Spain. 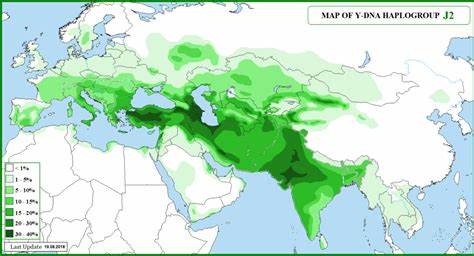 What Does It Mean to Have a J Haplogroup?

Those who have any subgroup or subclade of the J haplogroup likely share a direct male line ancestor tracing back 43,000 years to Western Asia. It means that you are distant cousins to anyone who descends from this specific haplogroup.

Among your famous, likely very distant cousins you might find Noah Webster (Merriam-Webster dictionary), Adam Sandler, Bernie Sanders and the current ruling house of Saudi Arabia. These connections may date back tens of thousands of years and you may have no notion that you have ancestry from Western Asia.

It is important to note that Y-DNA is passed down a solely male line and can not be found in females or be passed on by females. This means that your J haplogroup came father to son all the way from that original ancestor who first exhibited the J mutation all those many years ago.

Should I Test my Y-DNA?

It is likely if you are reading this post that you may already have taken some form of Y-DNA test. If however you tested with Living DNA or 23andMe you may only have a basic idea of your haplogroup. This is because they do not test the entirety of the Y-DNA specifically. As a result you may know you are in the J haplogroup but not which specific branch you belong to.

If you have an interest in determining in more detail where your ancestors came from based on your specific Y-DNA mutation you might want to get another test from FamilyTreeDNA. They specifically have Y-DNA tests and they can give you more accurate and full results.

Around 30,000 years ago 13,000 years after it first appeared in western Asia the J haplogroup split into two main subgroups, J1 and J2. These groups took a very similar migratory path and even today can be found in Arabia, Africa, Asia and the Mediterranean.