What is Eurogenes on GEDmatch?

If you are new to the free DNA genealogy assistance site GEDmatch you could certainly be forgiven for having a whole host of questions. When I first came across it several years ago I must confess there was a lot that confused me. Since then they have worked to make it more user friendly and it is much clearer but still it can be tough at first to know what you are looking at.

In this article we will be looking specifically at the Eurogenes project to help explain what it is, where it came from and how it can be helpful to you.

What Is the Eurogenes Project?

The Eurogenes Project, as the name not so subtly suggests, is a project that pertains specifically to European genes and DNA. Available on GEDmatch, Eurogenes has a set of admixture calculators (we will discuss this more later in the post) that can compare your ethnicity against a wide range of DNA samples.

These DNA samples have come from an array of volunteers and academic sources from throughout Europe. There are several calculators which have their own specific focus such as early farmers and hunter gatherer groups.

The word admixture is not DNA specific but it essentially refers to something that has been mixed or is mixed. Basically, cake batter is an admixture of the ingredients involved in its making. We too are an admixture of all our ancestors and this is why the term is important with regards to DNA.

When we refer to an admixture calculator for DNA this indicates an algorithm that is being used to determine the ingredients that make up our DNA. It is usually associated with ethnicity estimates and largely focused on communities that are mixed.

Genetically isolated communities whose population is small and highly interrelated do not have a diverse admixture. An example of this would be the Sentinelese, a tribe who live on North Sentinel Island in the Bay of Bengal, India.

The Sentinelese have been shut off from the outside world for centuries and have been openly hostile to attempts to make contact. We know very little about their culture except that they are not very advanced technologically speaking

When it comes to a more diverse area, for example New York City, the admixtures found in the inhabitants can be vastly varied. Essentially the admixture of our DNA comes from our ancestors who are themselves descended from peoples all around the world.

Basically speaking then our admixture is the percentages of each of our ethnicities. This is determined by comparing our DNA against global populations. There are notable similarities that can be attributed to various geographical locations. When these appear in our DNA results it indicates we likely have an ancestor who was born in a specific region.

History of the Eurogenes Project

You might think that a DNA project must have been created by some notable DNA specialist but actually Eurogenes was started by a blogger. Australian born David Wesolowski, who is better known to his subscribers as Davidski, started this project back in 2011.

Davidski started out using a version of Dodecad projects admixture software and chose to focus on European ancestry. The project was quickly handed off to GEDmatch whose current results come from their work that took place between 2012 to 2016.

With access to a massive DNA database GEdmatch were able to further Davidski's work freeing him up to continue his interests in heritage analysis. As mentioned there have been no updates to the project since 2016 but this does not mean that it is not still a very useful tool.

There are 13 different calculators that make up the Eurogenes project, each one with its own focus region or group.

You will note that most of these calculators include the letter K and a corresponding number. This number indicates how many European communities or populations you are testing your DNA against. So for example K7 has seven populations and K9 has nine populations.

How the Results Are Displayed

Once your specific DNA has been tested against your chosen calculator you will get a pie chart with your estimated ethnicities. All of the populations tested against will be listed along the left side of the screen with your percentage displayed where applicable next to the relevant groups.

If you go through and test your results against each calculator you will note they will be different on each. This is because obviously each has different testing regions involved. 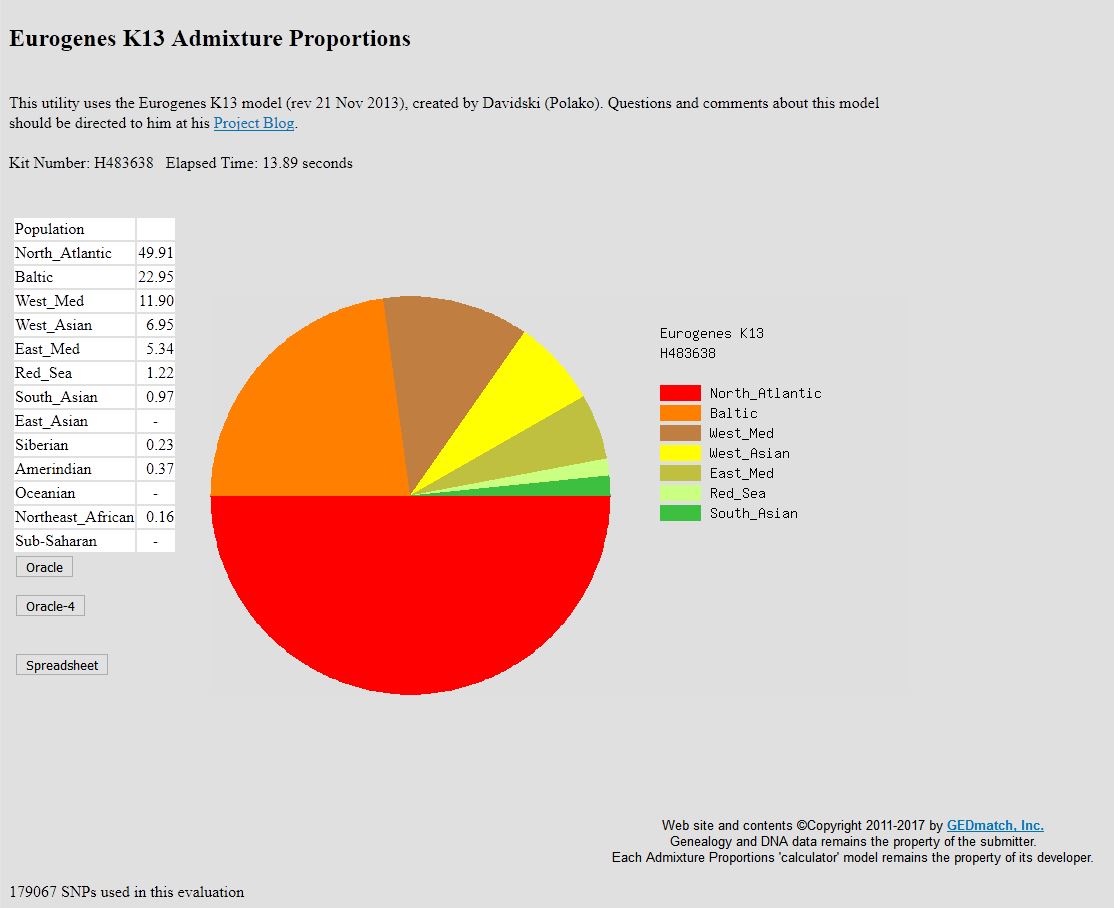 It is important to note that in this instance more is not always better when it comes to regions you test against. The K36 calculator for instance lists a number of non European regions which for someone like me is actually pointless.

The lower K number calculators are better. Anything from K15 and below will likely give you some interesting results.

It Has a Tendency to Find the Best Fit

There is somewhat of a drawback to many of these calculators in that they seek to assign an ethnicity to cover 100% of your admixture. This means that if your DNA shows results for a certain region if it is not one of the ones within the calculator it will attribute it to a close region that is included.

This is obviously problematic when it comes to accuracy. The chances are though that the DNA you have supplied to GEDmatch has already been through the ethnicity estimates at one of the bug testing companies so you have an idea of your more accurate results.

It Is Still Fun

I know I have pointed out an inescapable flaw with Eurogenes in terms of accuracy but in truth this is still a fun tool with information to offer. Personally I find the Hunter.Gatherer calculator interesting and fun.

In my own results I see 58% Baltic Hunter Gatherer which makes sense due to my British heritage. Cultures such as the Celts and Scandinavians all originated most likely in Central and Eastern Europe migrating throughout the continent.

The Eurogenes project is an interesting tool on GEDmatch although in all honesty could really use an update. It allows you to test your DNA results against calculators to determine some of the areas your ancestors may be from.

In truth your ethnicity estimate from AncestryDNA or 23andMe is probably way more accurate and certainly more useful. This is still something fun to goof around with if you have spare time. It won’t likely bring about a revelation in terms of your ancestry but it doesn’t cost anything to try as long as you have your RAW DNA available to upload.