If you have ever been on GEDmatch you will know there are a whole host of DNA projects listed on the site that you can test your DNA against. These unique calculators use your specific DNA in comparison to the databases they have attached to these calculators.

The result of testing against these databases on GEDmatch such as Dodecad is an ethnicity estimate. What specifically is Dodecad though? In this post we will look more deeply into this GEDmatch calculator to learn how it was created, how it’s used and what it means to us.

Dodecad is an admixture calculating tool and is actually the first that GEDmatch ever provided for its DNA customers. It is also in fact the basis for all the other admixture projects on the site as the base software of Dodecad serves as the starting point for all other GEDmatch projects. 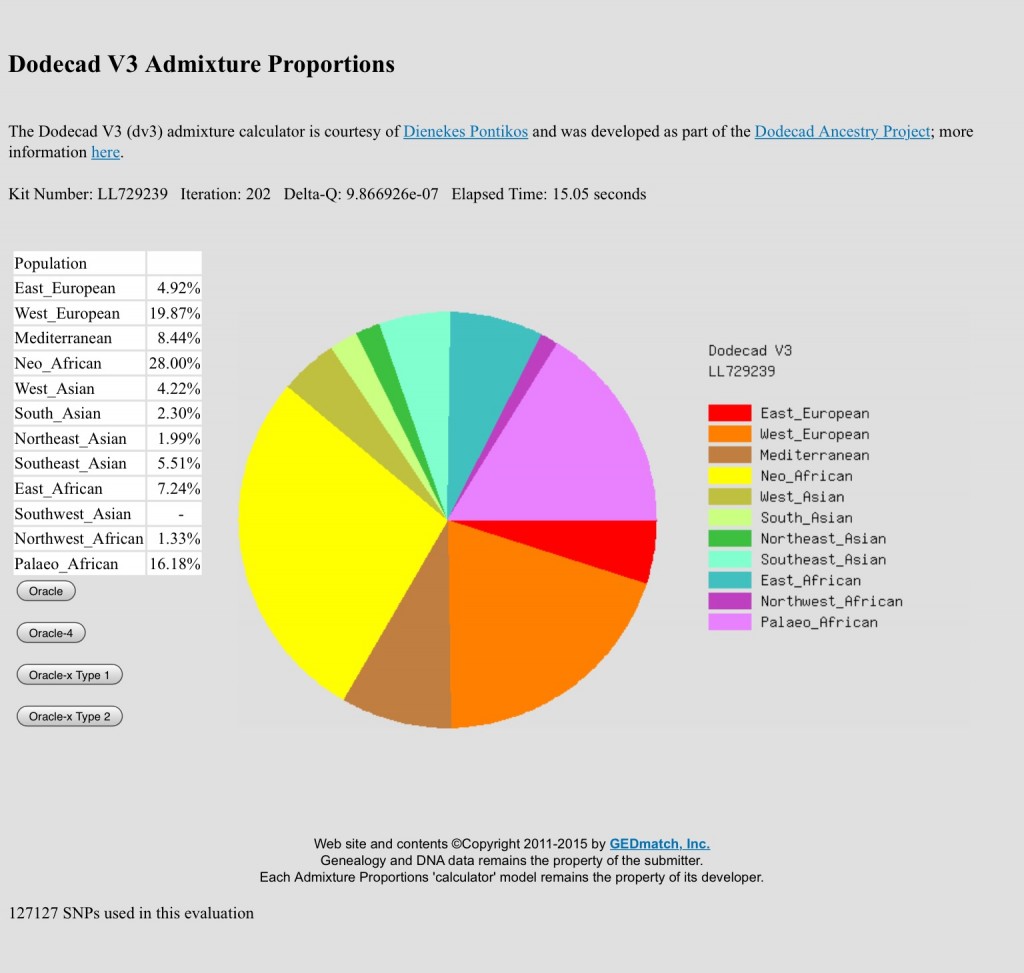 The word admixture is not DNA specific but it essentially refers to something that has been mixed or is mixed. Basically, cake batter is an admixture of the ingredients involved in its making. We too are an admixture of all our ancestors and this is why the term is important with regards to DNA.

When we refer to an admixture calculator for DNA this indicates an algorithm that is being used to determine the ingredients that make up our DNA. It is usually associated with ethnicity estimates and largely focused on communities that are mixed.

Genetically isolated communities whose population is small and highly interrelated do not have a diverse admixture. An example of this would be the Sentinelese, a tribe who live on North Sentinel Island in the Bay of Bengal, India.

The Sentinelese have been shut off from the outside world for centuries and have been openly hostile to attempts to make contact. We know very little about their culture except that they are not very advanced technologically speaking

When it comes to a more diverse area, for example New York city, the admixtures found in the inhabitants can be vastly varied. Essentially the admixture of our DNA comes from our ancestors who are themselves descended from peoples all around the world.

Basically speaking then our admixture is the percentages of each of our ethnicities. This is determined by comparing our DNA against global populations. There are notable similarities that can be attributed to various geographical locations. When these appear in our DNA results it indicates we likely have an ancestor who was born in a specific region.

History of the Dodecad Project

In the late 2000s several bloggers with an interest in genetics started becoming prevalent on the internet. These non university affiliated bloggers brought their own independent analysis of anthropology and genetics.

Also around this time several universities made some of their genetic analysis tool software open-source. This allowed those with the know-how to use this software to create their own studies and projects.

One of these tools which became very popular allowed users to compare a single DNA sample to potentially thousands of others all at once. This was useful as you could carefully select reference samples that might represent a specific ethnicity or geographic region.

It was 2010 that a Greek blogger who wrote under the name Dienekes Pontikos became interested in these open-source genetic analysis tools. It was Dienekes' opinion that the major studies of the day were too focused on Western European DNA and he was not wrong.

Dienekes' blog was mostly focused on anthropology and population migration but when he discovered these open-source software tools he had an idea. The ambitious blogger put out an open call to his readers requesting they send him their raw DNA files from 23andMe.

Initially Dienekes aimed to gather samples from certain ethnic and geographical groups. These included Greeks, Finnish, Albanians. Southern Italians and other under studied groups. This study was specifically excluding English, Celtic, German and French samples as Dienekes determined these had already been heavily researched.

Using the DNA that his readers sent in, Dienekes was able to create his own versions of these analytical tools. Very quickly, and much to GEDmatches benefit, Dienekes made his tools available as open-source software. This new analytical tool was called DIYDodecad.

The Legacy of Dodecad

Dienekes himself used open-source software from the big universities to create his project. Thanks to his generosity in making his creation available to the public, other genetics and anthropology bloggers were able to create their own projects as well.

It did not take long for a number of other projects to start to arise on other blogs. You will likely see many of these on GEdmatch including Eurogenes, Harappa and MDLP. These were not created by GEDmatch but by individual bloggers who later allowed GEDmatch to display their work.

As with many things scientific there was always some in-fighting among bloggers who deemed their projects better than others. Some of course were better than others and as they were created to the specific creators' vision that had varying levels of usefulness.

The Rocky Start Between Dodecad and GEDmatch

The relationship between Dienkes and GEDmatch did not get off to the best start as the fledgling site made a major blunder. It was actually a blogger named Zacl Ajmal who had co-opted the Dodecad software that worked with GEDmatch to create the free tool they offered on their site.

Initially GEDmatch neglected to give any credit to Dodecad creator Dienekes whose tool was essentially the basis of their very first project. Obviously Dienekes was displeased but to the credit of GEDmatch they quickly reached out to him and rectified their mistake.

The Dodecad Calculators on GEDmatch

Dienekes' Dodecad project grew over time so it eventually had quite a range of under-studied groups. This allowed the possibility for GEDmatch to create several sub calculators which were connected to the main Dodecad project.

Each of these calculators test your DNA against specific regions so understanding what they are testing against is important. As an example I know I am very British so I would test my DNA against a calculator that contains mostly British and Northern European research samples. It would be pointless for me to test against calculators that focused more on African or Asian groups.

This was the original Dodecad calculator of GEDmatch as it was aimed mainly at the Eurasian region. This covered a number of regions such as.

· Anatolia, Balkans and the Caucasus 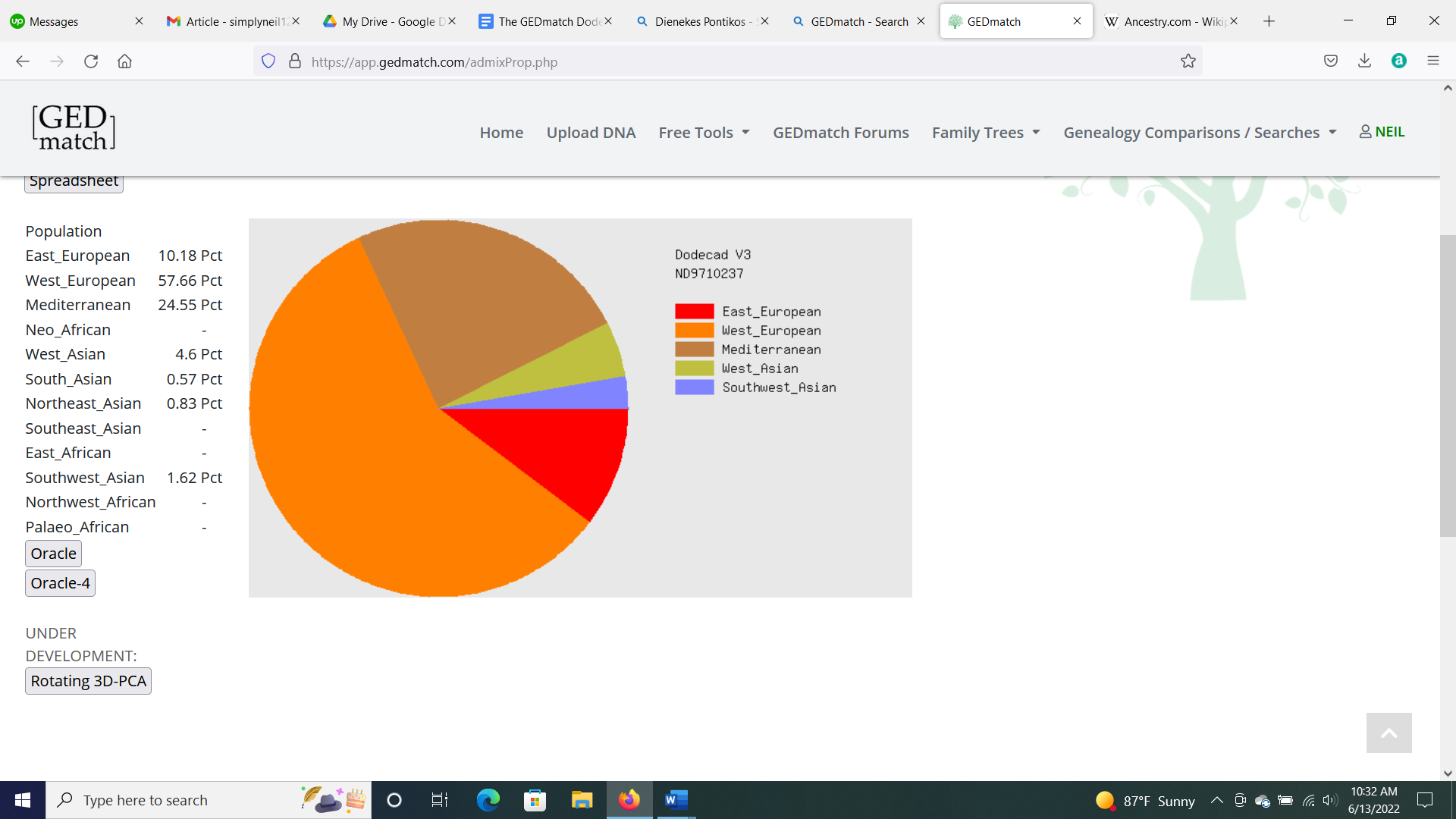 Dodecad V3 as you might realize was not the very first attempt at the calculator by Dienekes. There were several tweaks made before Dienekes finally settled on this. It is this version that GEDmatch currently hosts on their website.

Dodecad V3 as you might notice covered 7 regions whereas the slightly misleading named World9 included an additional two regions. The intent was to add Indigenous Americans and Australians to the already existing test regions.

As the number of raw DNA samples increased Dienekes expanded on his Dodecad work creating K12 and K7. In a second iteration of these they became K12b and K7b. Interestingly they cover exactly the same set of DNA data but K12b is broken down into more specific regions that K7b.

This was very much a pet project for Dienekes who, being Greek, obviously has a great anthropological interest in his home region's history. Some of you may know what Gedrosia is but for those who don’t let me explain.

Gedrosia is essentially a historic region of Asia that refers to areas invaded by Alexander the Great. Alexander of Macedonia of course is a very notable individual that people of Greek descent would have interest in.

Although initially excluded from the Dodecad project despite being under-studied Dienekes finally created an African calculator. This project covers 9 African regions which are as follows.

This obviously is a calculator that is best used by those with mainly African ancestry.

The Dodecad project was a groundbreaking non-academic study started as part of a blog. Created by a Greek blogger with a deep interest in anthropology and population migration it quickly gathered a following and became an interesting free tool for genealogy researchers to make use of.